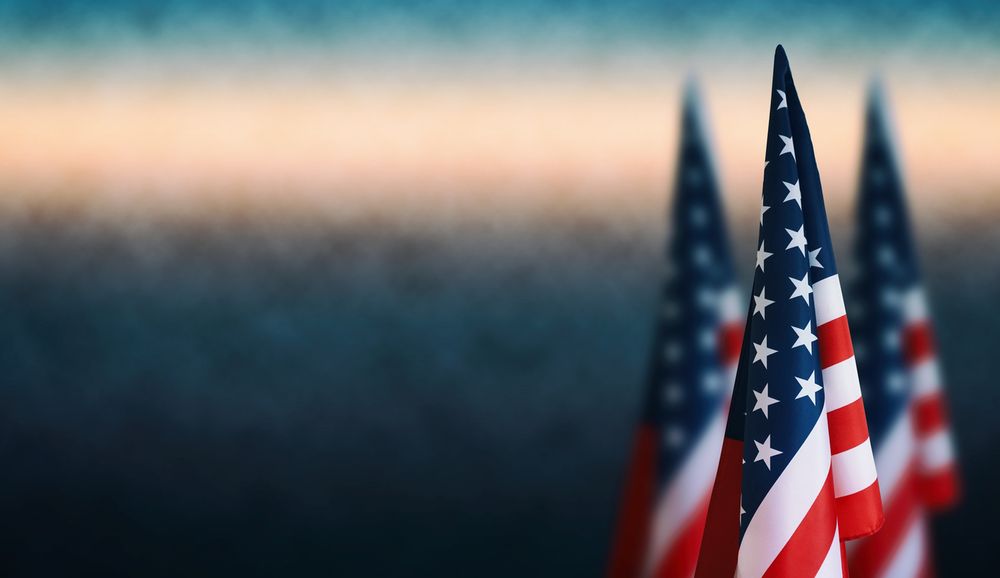 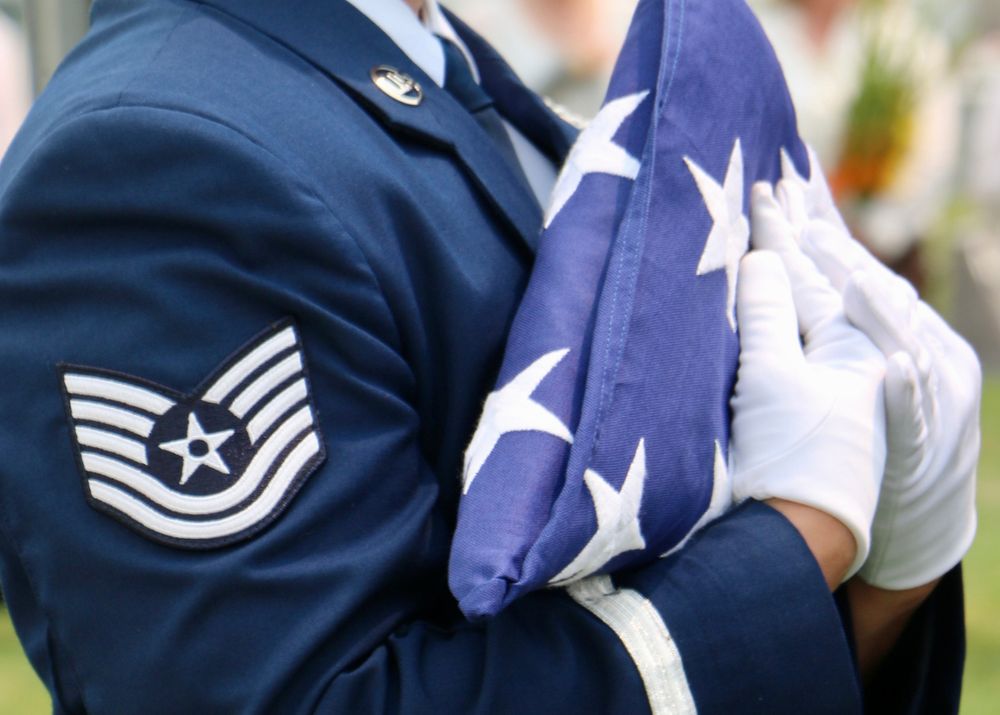 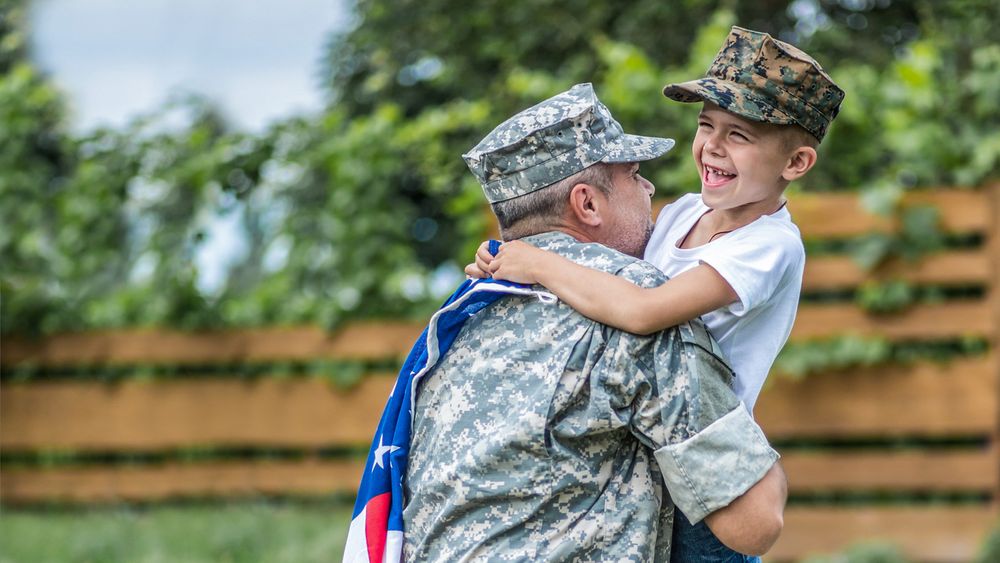 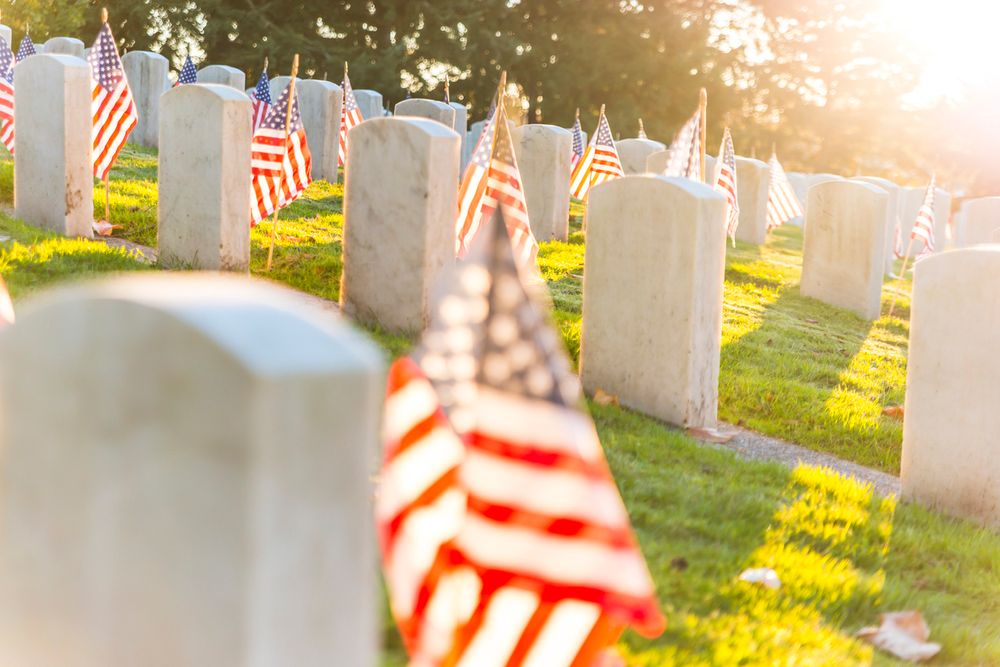 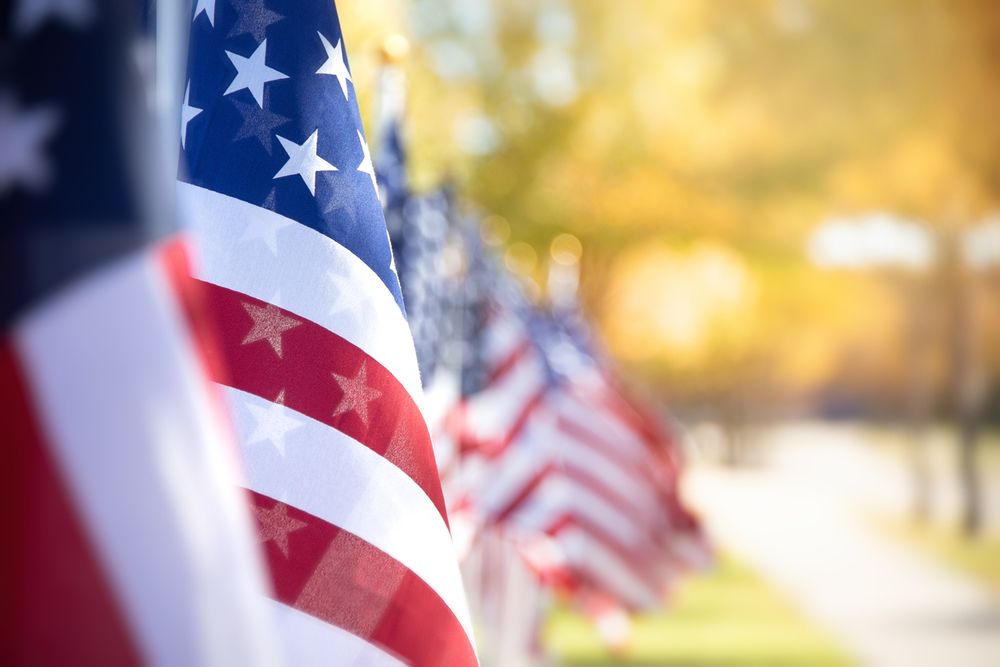 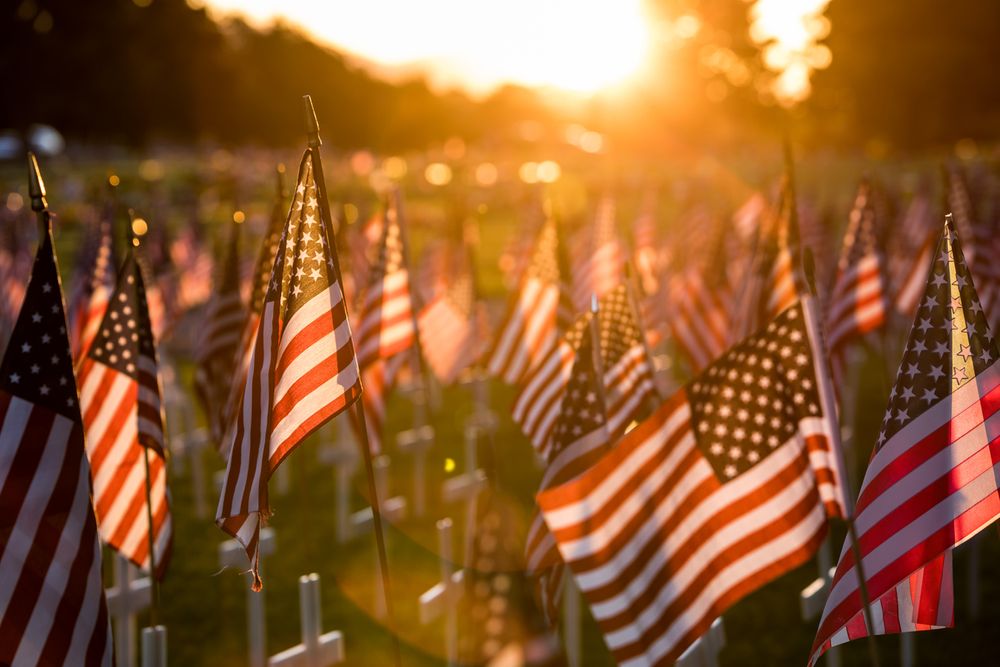 Memorial Day weekend may mark the start of summer, but it was enacted in solemn respect to America’s fallen heroes. Before you kickstart your summer plans, let’s take a moment to honor U.S. veterans with these 57 patriotic Memorial Day quotes.

Many of us celebrate Memorial Day with baseball games, backyard barbeques, and cracking open a cold one.

However, what we may forget is that Memorial Day isn’t just about family fun. It’s an important federal holiday dedicated to the men and women who died in military service.

Memorial Day is a day equally deserving of respect and celebration. So, as the coolness of spring creeps to a close, we encourage you to kick back, relax, and take a moment to reflect on the gravity of this day.

To help you out, we’ve put together a collection of Memorial Day quotes honoring this nation’s fallen soldiers.

The Origins of Memorial Day

The exact origins of Memorial Day are unclear. We celebrate it every year on the last Monday of May, but the holiday first began as Decoration Day.

Decoration Day was enacted following the American Civil War. It became an official federal holiday in 1971 largely thanks to General John A. Logan, a former Union soldier and commander-in-chief of the Grand Army of the Republic.

The Civil War devastated the country, claiming the lives of about 620,000 soldiers. Before the holiday was enacted, Americans would hold tributes to both Union and Confederate soldiers, lighting vigils and adorning their graves with flowers.

Following the World Wars, Americans began to honor all military personnel, not just those lost during the Civil War.

As a result, the holiday was renamed Memorial Day in 1967. The name change also prompted lawmakers to change the date from May 30th to the last Monday of May to extend the weekend.

We also dedicate two other days to the U.S. military: Armed Forces Day (also observed in May) and Veterans Day (also known as Armistice Day, observed on November 11th). Memorial Day is dedicated explicitly to soldiers who died in the line of duty, though there’s sometimes crossover in observance.

For some, it’s the perfect excuse for a weekend getaway with a cherished loved one. For others, it’s a painful reminder of personal loss.

Regardless of how you choose to spend the holiday, let’s pause and reflect on these 15  Memorial Day quotes from prominent historical figures:

1. “Our nation owes a debt to its fallen heroes that we can never fully repay.”- Barack Obama

2. “In the end, we will remember not the words of our enemies, but the silence of our friends.”- Martin Luther King, Jr.

3. “How important it is for us to recognize and celebrate our heroes and she-roes.” – Maya Angelou

4. “Patriotism is not short, frenzied outbursts of emotion, but the tranquil and steady dedication of a lifetime.” – Adlai Stevenson II

5. “As we set today aside to honor and thank our veterans, let us be mindful that we should do this every day of the year and not just one.” – Beth Pennington

6. “Those who have long enjoyed such privileges as we enjoy forget in time that men have died to win them.” – Franklin D. Roosevelt

7. “America’s Veterans have served their country with the belief that democracy and freedom are ideals to be upheld around the world.” – John Dolittle

8. “It is foolish and wrong to mourn the men who died. Rather we should thank God such men lived.” – George S. Patton

10. “Freedom makes a huge requirement of every human being. With freedom comes responsibility.” – Eleanor Roosevelt

11. “As we express our gratitude, we must never forget that the highest appreciation is not to utter the words, but to live by them.” – John F. Kennedy

12. “No man is entitled to the blessings of freedom unless he be vigilant in its preservation.” – General Douglas MacArthur

13. “Never throughout history has a man who lived a life of ease left a name worth remembering.” – Theodore Roosevelt

14. “Our debt to the heroic men and valiant women in the service of our country can never be repaid. They have earned our undying gratitude. America will never forget their sacrifices.” – Harry S. Truman

15. “Never in the field of human conflict was so much owed by so many to so few.” – Winston Churchill

As a day dedicated to honoring not only patriotism but also sacrifice, finding the right words can be difficult.

In which case, sometimes the less said—the better.

Here are 16 short Memorial Day quotes for when you don’t know what to say:

16. “The patriot’s blood is the seed of freedom’s tree.” – Thomas Campbell

17. “I have long believed that sacrifice is the pinnacle of patriotism.” – Bob Riley

18. “Heroism is not only in the man but in the occasion.” – Calvin Coolidge

21. “Here men endured that a nation might live.” – Herbert Hoover

25. “If you want to thank a soldier, be the kind of American worth fighting for.” – Unknown

27. “No duty is more urgent than that of returning thanks.” – Sgt. Major Bill Paxton

28. “What I can do for my country, I am willing to do.” – Christopher Gadsden

29. “Let their remembrance be as lasting as the land they honored.” – Daniel Webster

30 “A man is a patriot if his heart beats true to his country.” – Charles E. Jefferson

31. “Where liberty dwells, there is my country.” – Benjamin Franklin

Memorial Day may be a solemn affair, but many view it as a time to cherish their loved ones rather than mourn. As you contemplate what this day means to you, be sure to appreciate your friends and family.

We’ve put together 14 uplifting Memorial Day quotes honoring this sentiment. Check them out below:

32. “So long as the memory of certain beloved friends lives in my heart, I shall say that life is good.” – Hellen Keller

33. “We often take for granted the very things that most deserve our gratitude.” – Cynthia Ozick

34. “We do not know one promise these men made, one pledge they gave, one word they spoke; but we know they summed up and perfected, by one supreme act, the highest virtues of men and citizens. For love of country, they accepted death, and thus resolved all doubts, and made immortal their patriotism and their virtue.” – James A. Garfield

36. “Our flag does not fly because the wind moves it. It flies with the last breath of each soldier who died protecting it.” – Unknown

37. “And they who for their country die shall fill an honored grave, for glory lights the soldier’s tomb, and beauty weeps the brave.” – Joseph Rodman Drake

38. “The legacy of heroes is the memory of a great name and the inheritance of a great example.”- Benjamin Disraeli

39. “Who kept the faith and fought the fight; The glory theirs, the duty ours.” – Wallace Bruce

40. “America without her soldiers would be like God without His angels.” – Claudia Pemberton

41. “I think of a hero as someone who understands the degree of responsibility that comes with his freedom.” – Bob Dylan

42. “Ceremonies are important. But our gratitude has to be more than visits to the troops and once-a-year Memorial Day ceremonies. We honor the dead best by treating the living well.” – Jennifer M. Granholm

43. “If words cannot repay the debt we owe these men, surely with our actions we must strive to keep faith with them and with the vision that led them to battle and to final sacrifice.” – Ronald Reagan

44. “There is nothing wrong with America that cannot be cured with what is right in America.” – William J. Clinton

45. “To those in uniform serving today and to those who have served in the past, we honor you today and every day.” – Unknown

As with most things all-American, Memorial Day serves an inspiration to many. It’s also an excellent opportunity to discuss the impact of the holiday and the U.S. military.

Check out our top Malcolm X quotes and Dalai Lama quotes for more inspirational quotes. For more uplifting sayings and messages about Memorial Day, take a look at these 12 quotes below:

46. “The brave die never, though they sleep in dust: Their courage nerves a thousand living men.” – Minot J. Savage

47. “This is the day we pay homage to all those who didn’t come home. This is not Veterans Day; it’s not a celebration, it is a day of solemn contemplation over the cost of freedom.” – Tamra Bolton

48. “Memorial Day isn’t just about honoring veterans; it’s honoring those who lost their lives. Veterans had the fortune of coming home. For us, that’s a reminder of when we come home we still have a responsibility to serve. It’s a continuation of service that honors our country and those who fell defending it.” – Pete Hegseth

49. “Regard your soldiers as your children, and they will follow you into the deepest valleys; look on them as your own beloved sons, and they will stand by you even unto death.”- Sun Tzu

50. “Courage is almost a contradiction in terms. It means a strong desire to live taking the form of readiness to die.” – G.K. Chesterson

51. “The willingness of America’s veterans to sacrifice for our country has earned them our lasting gratitude.” – Jeff Miller

52. “Over all our happy country—over all our Nation spread, is a band of noble heroes—is our Army of the Dead.” – Will Carleton

53. “I believe our flag is more than just cloth and ink. It is a universally recognized symbol that stands for liberty and freedom. It is the history of our nation, and it’s marked by the blood of those who died defending it.” –  John Thune

54. “Duty, honor, country. Those three hallowed words reverently dictate what you ought to be, what you can be, what you will be.” – General Douglas MacArthur

55. “Veterans are a symbol of what makes our nation great, and we must never forget all they have done to ensure our freedom.”- Rodney Frelinghuysen

56. “A hero is someone who has given his or her life to something bigger than oneself.” –  Joseph Campbell

57. “Some people live an entire lifetime and wonder if they have ever made a difference in the world. A veteran does not have that problem.” – Ronald Reagan

The quotes we’ve gathered above honor this sometimes underappreciated holiday.

At its core, Memorial Day is about remembrance, respect, and gratitude. Its origins as a Civil War tribute and, later, a memorial to the World Wars emphasize the long-lasting impact of war.

By articulating this impact and the loss and hardship brought on by duty, we can better appreciate the true meaning of the holiday.

Let us know in the comments below!