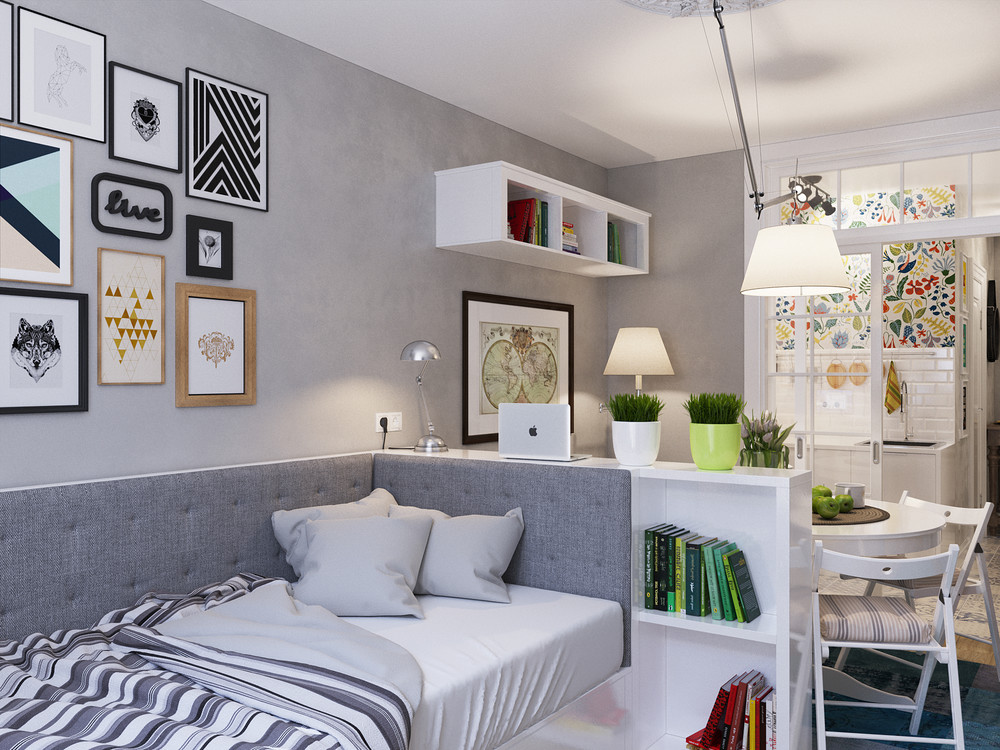 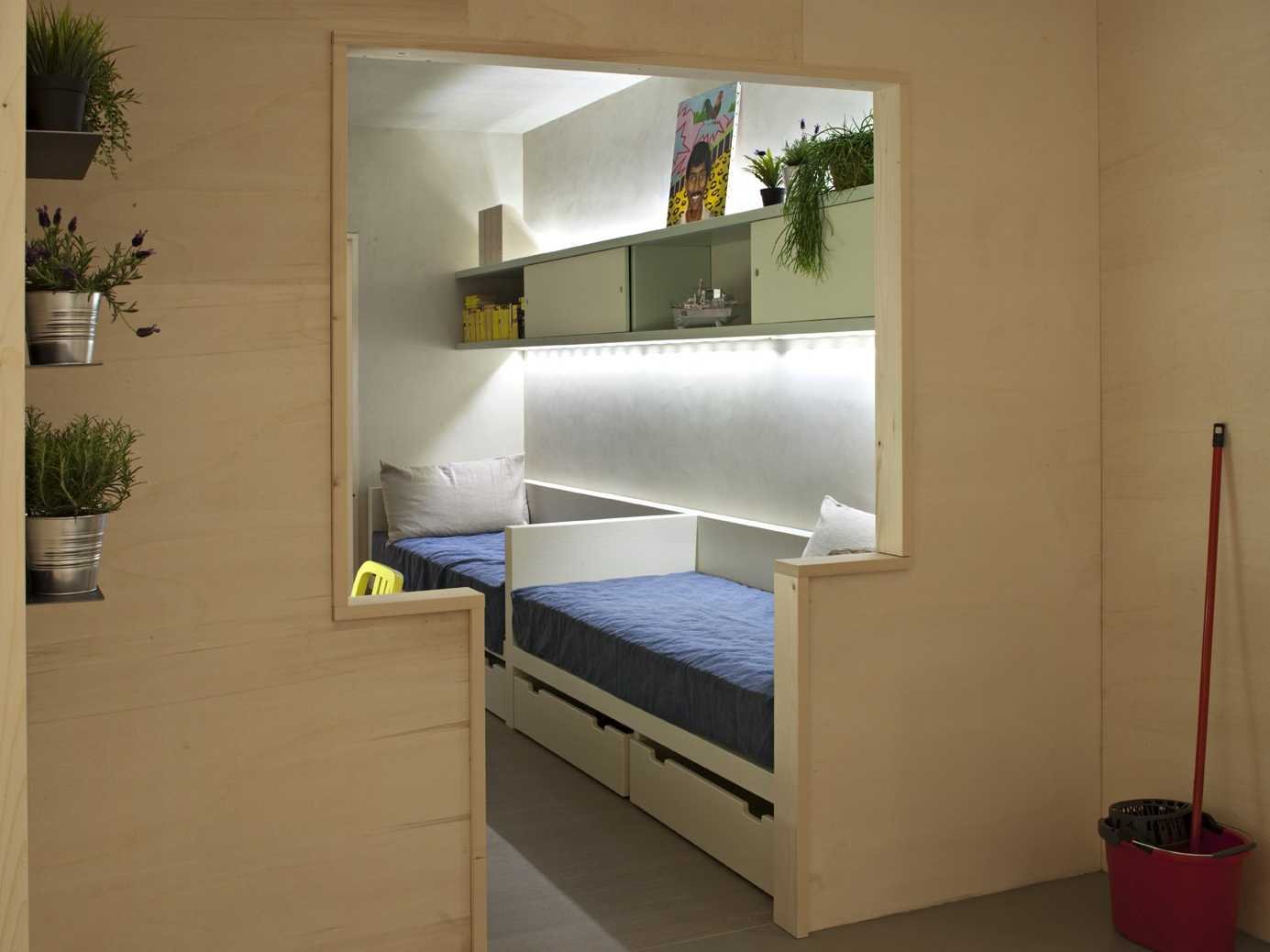 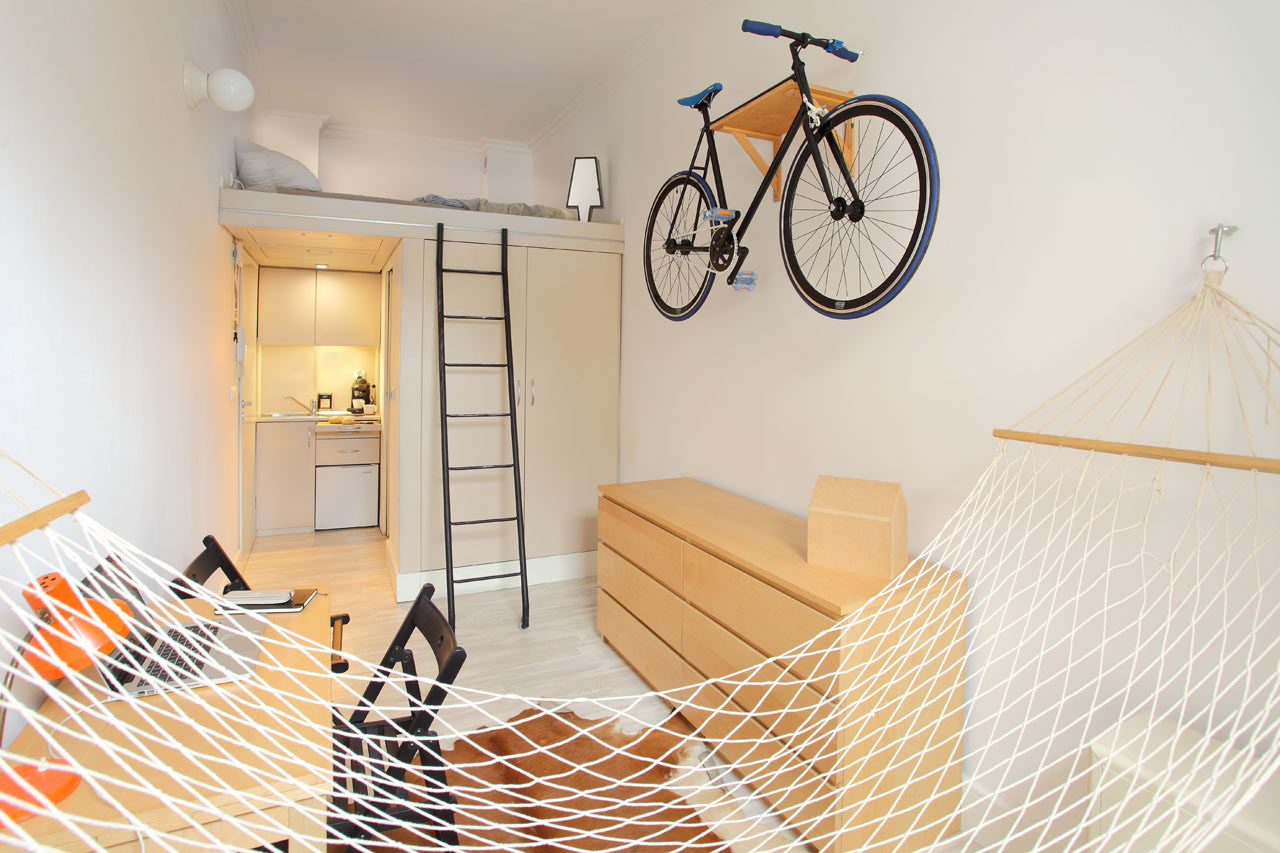 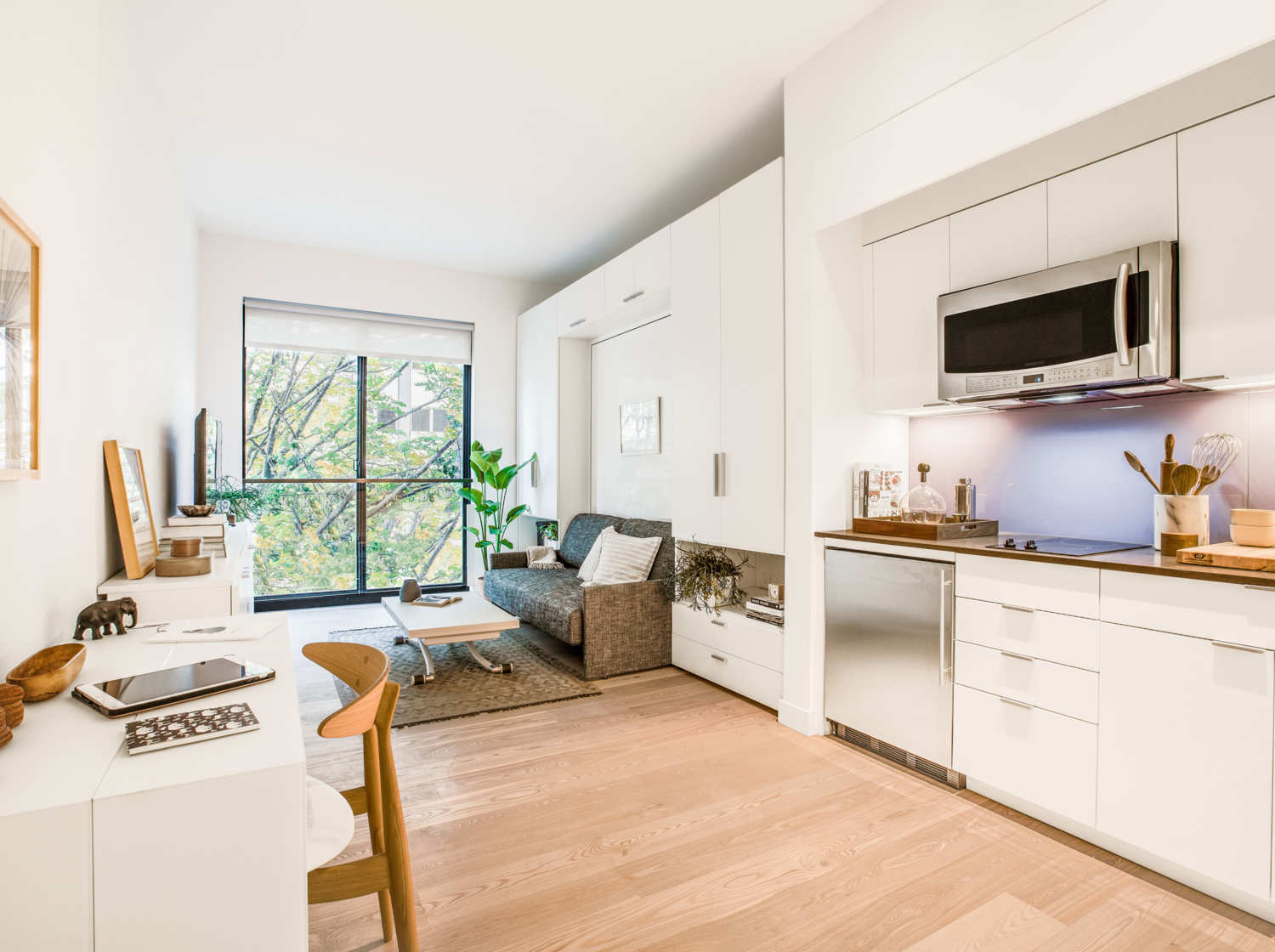 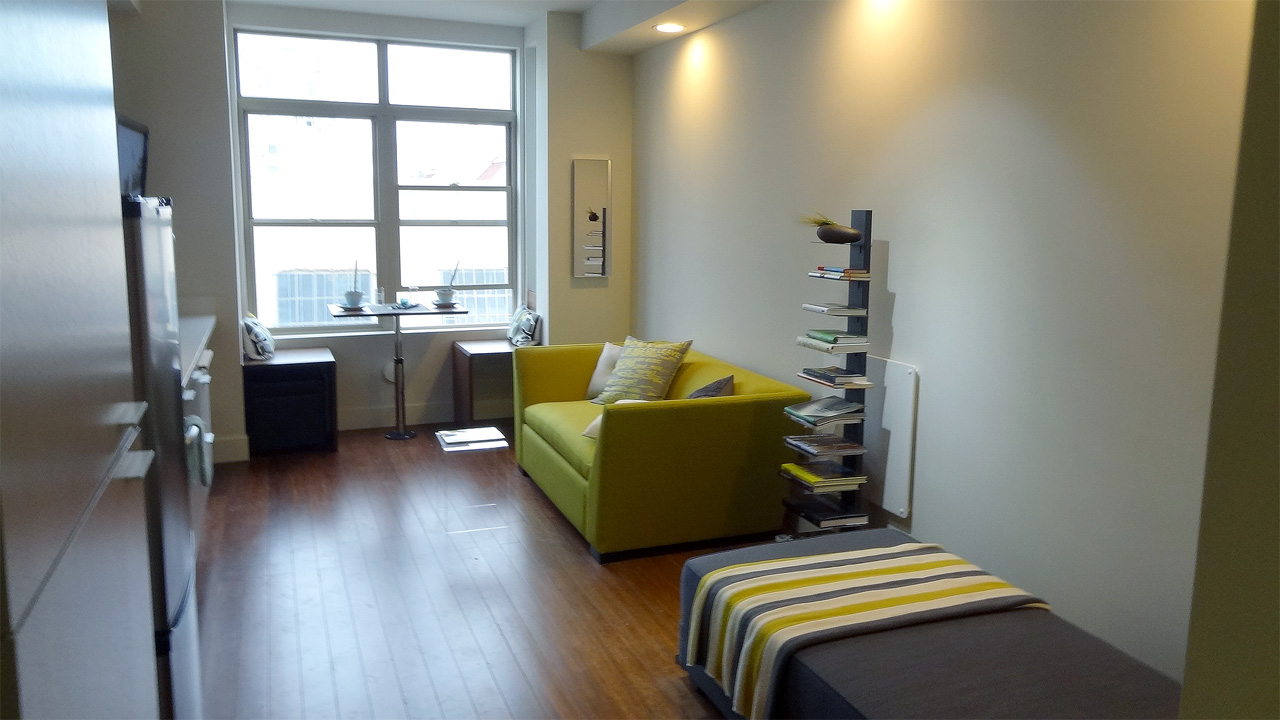 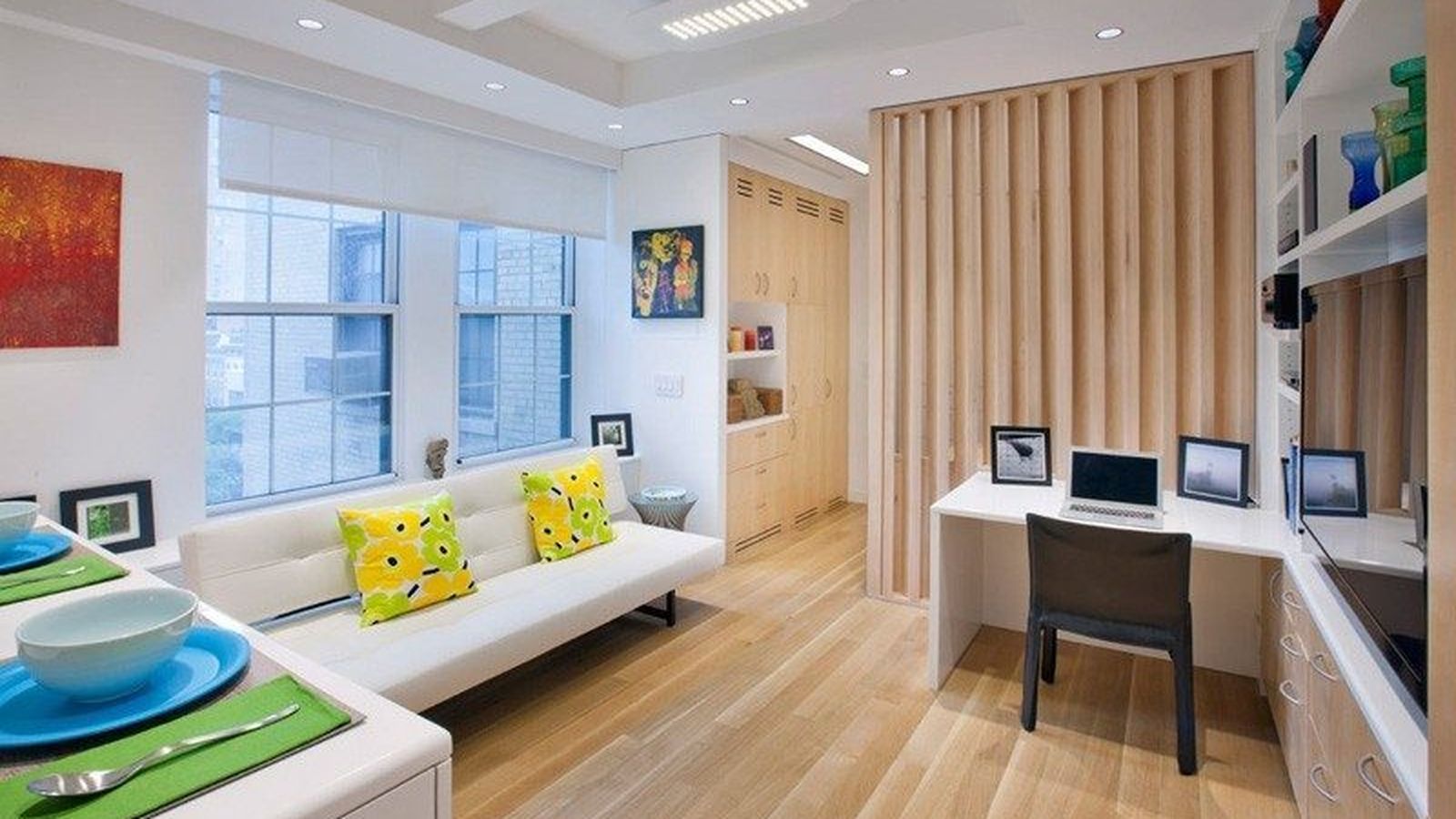 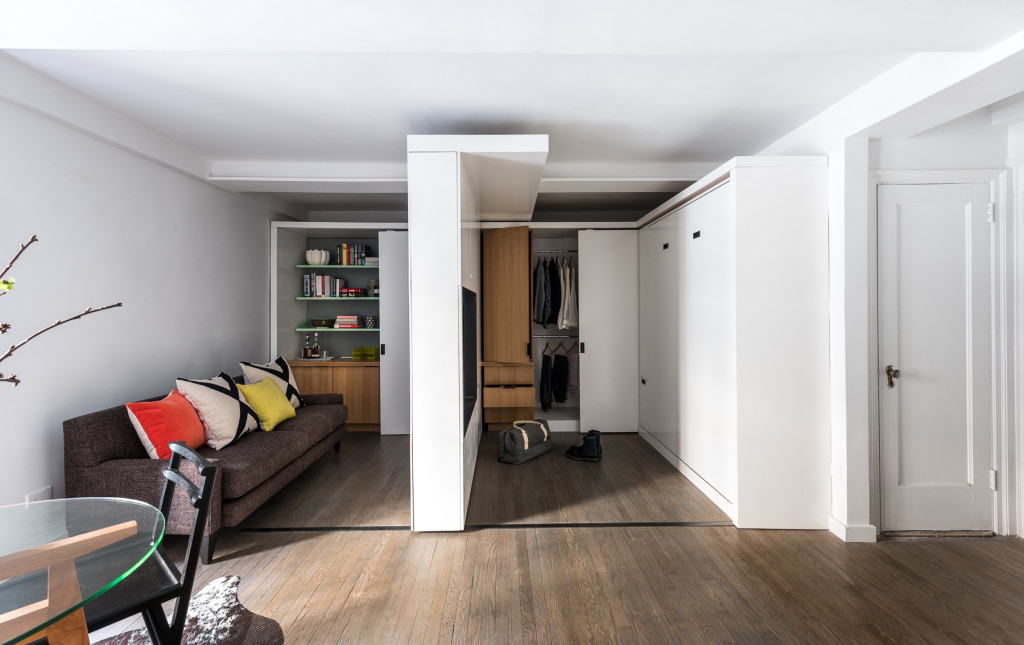 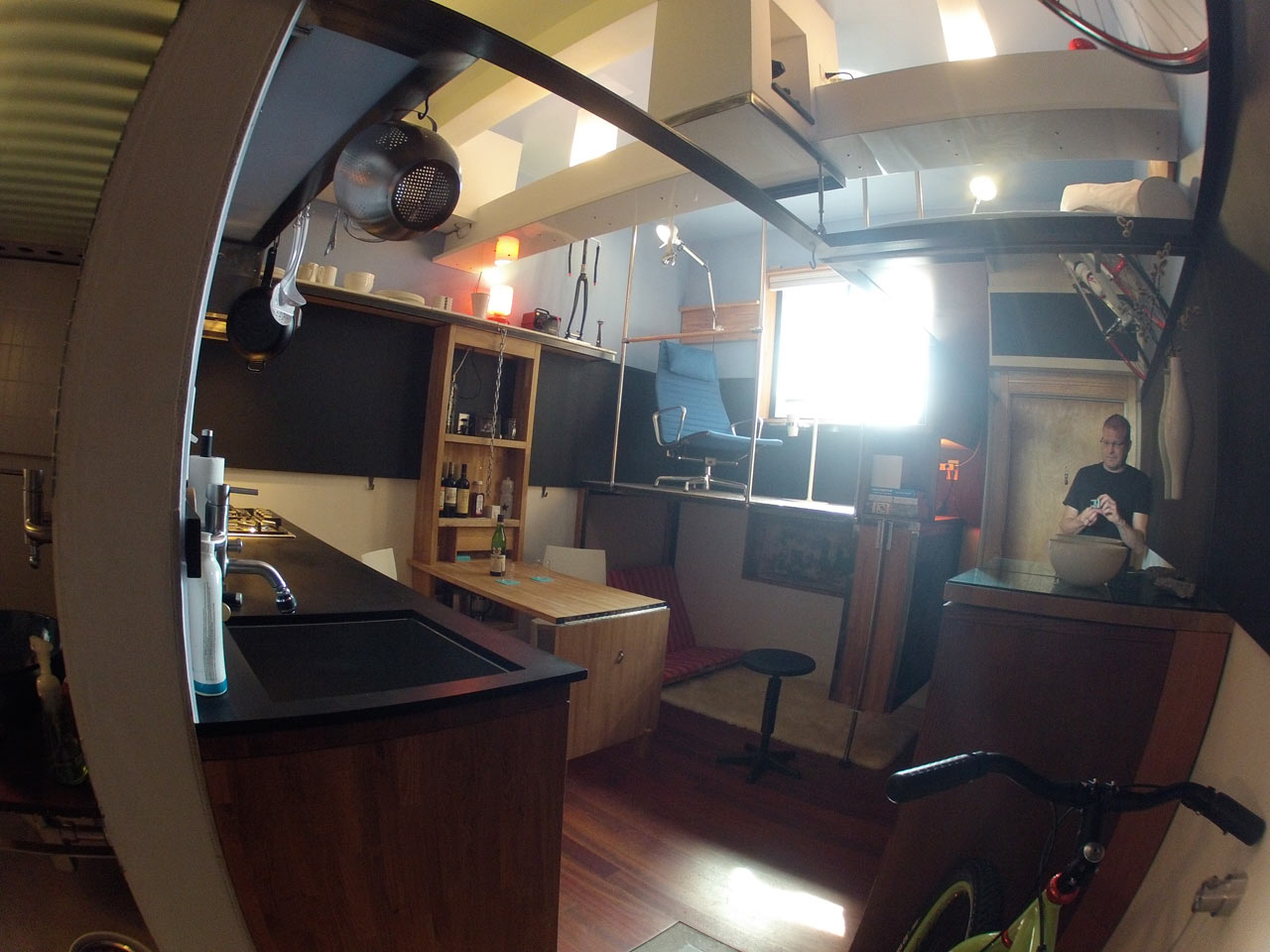 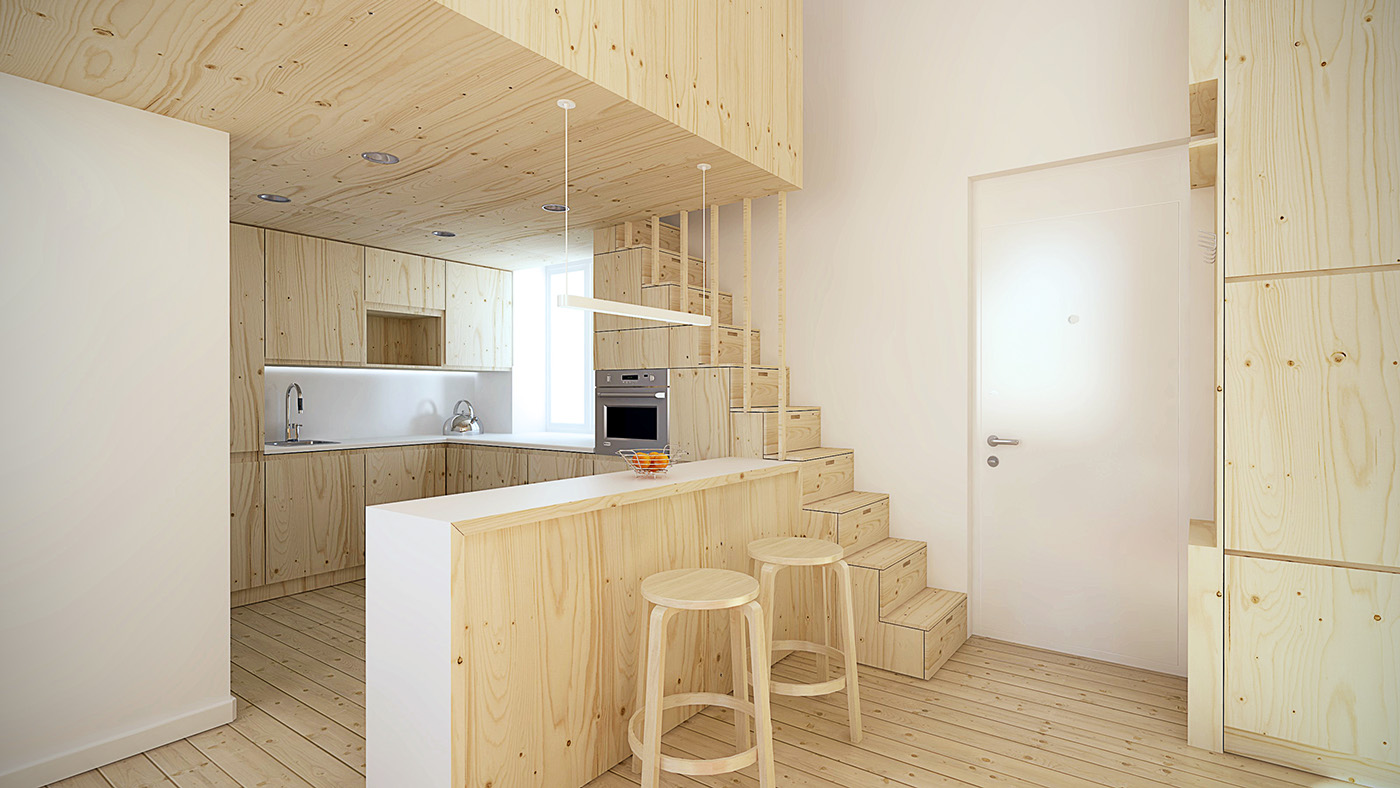 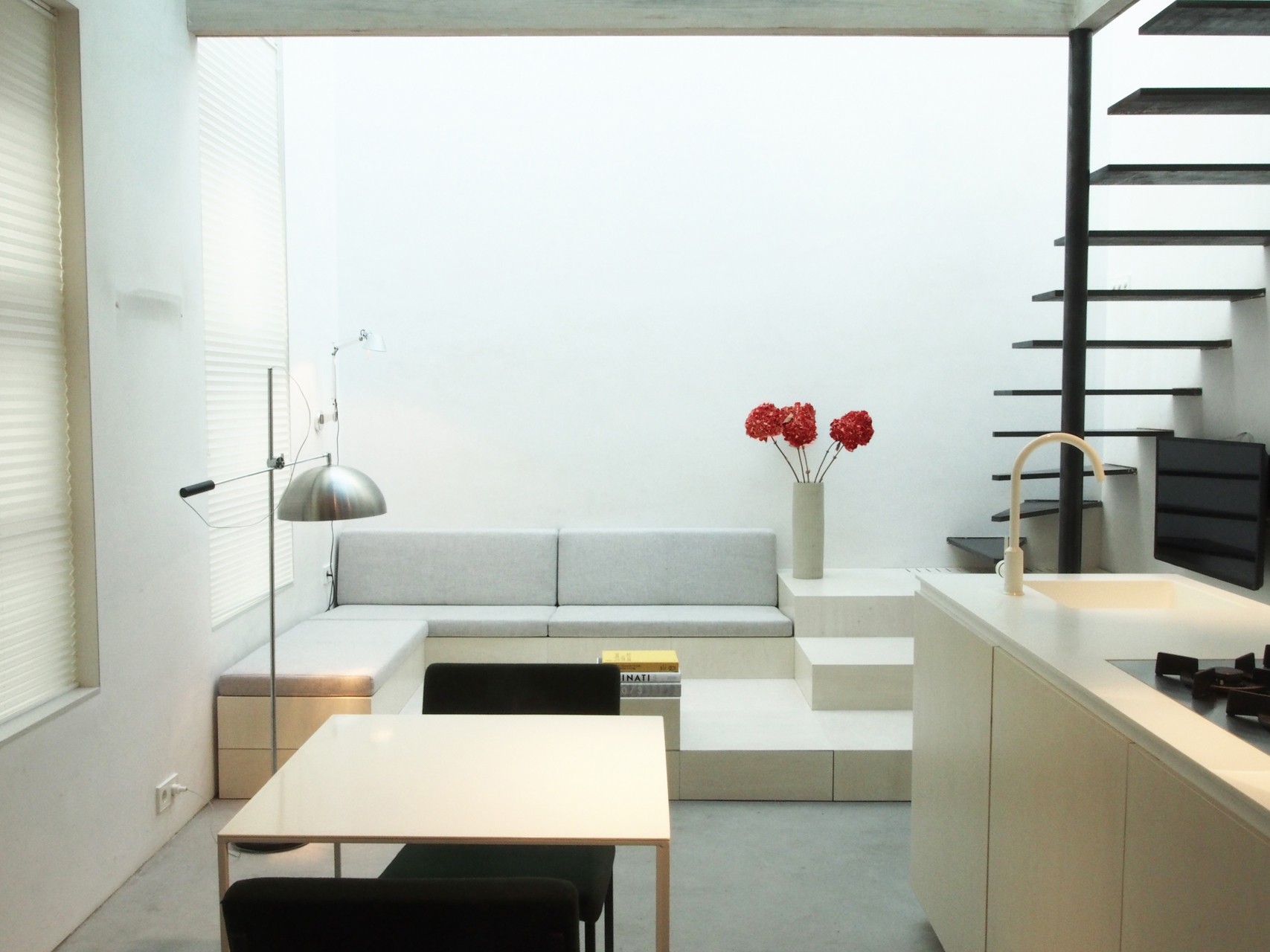 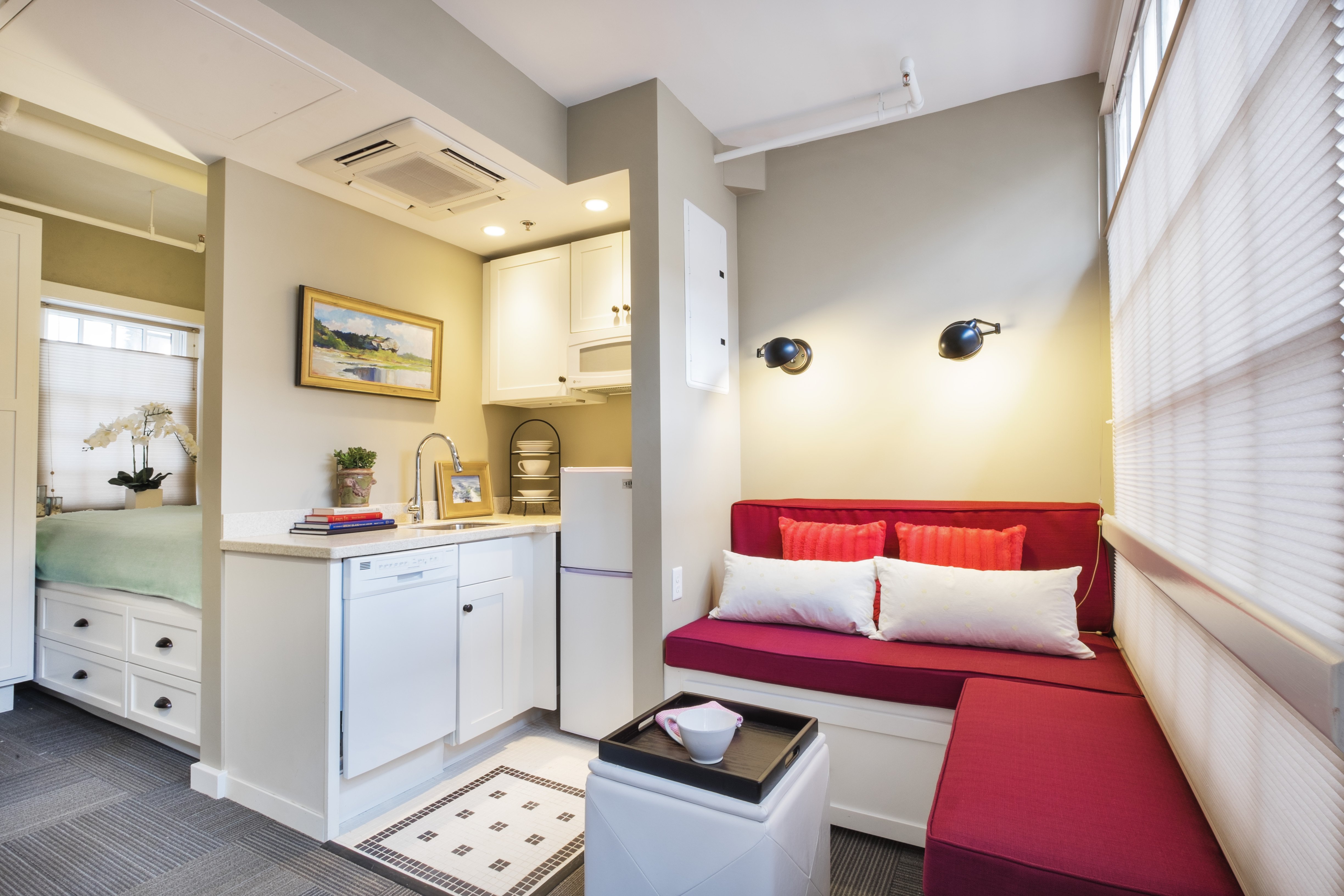 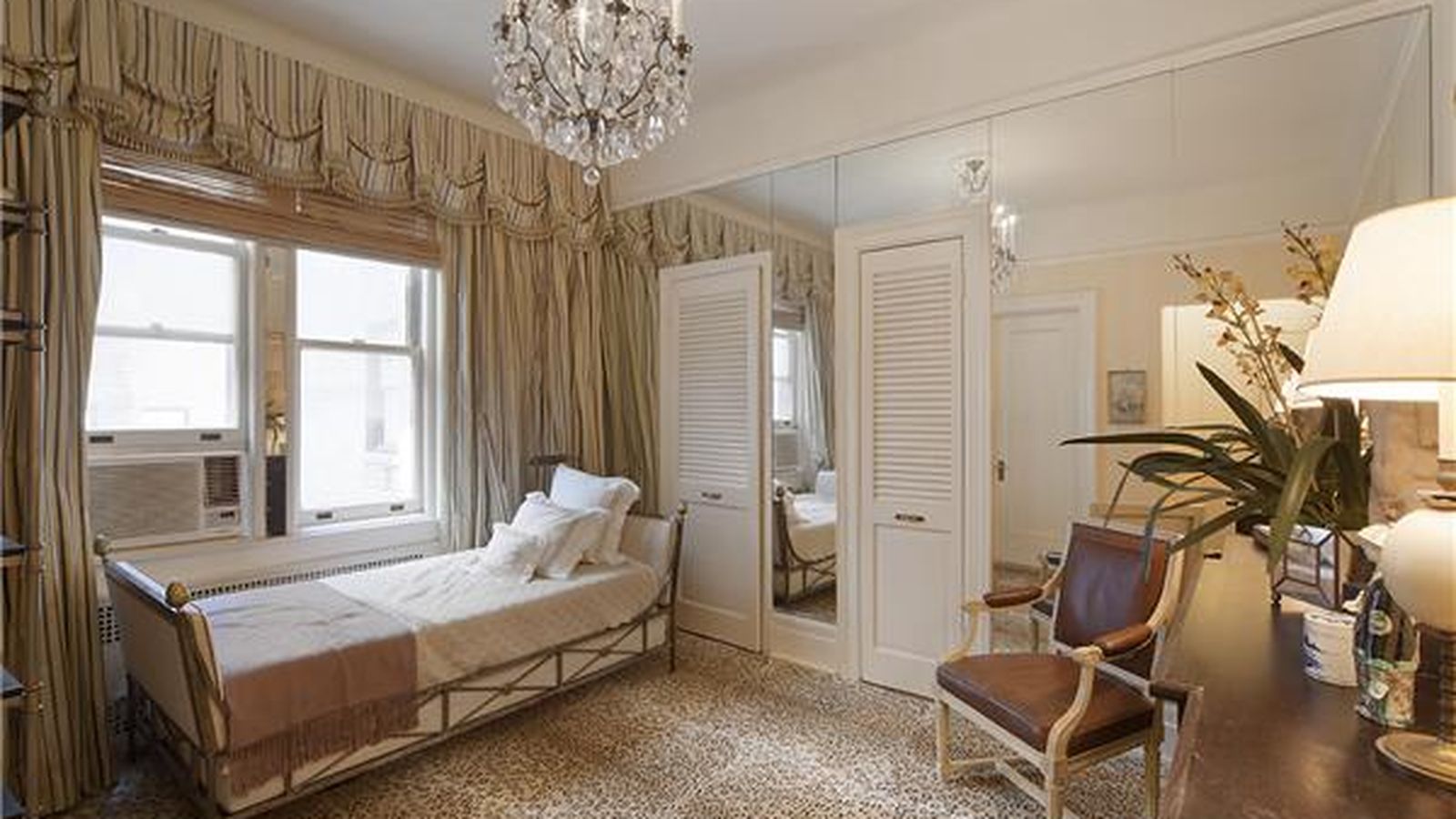 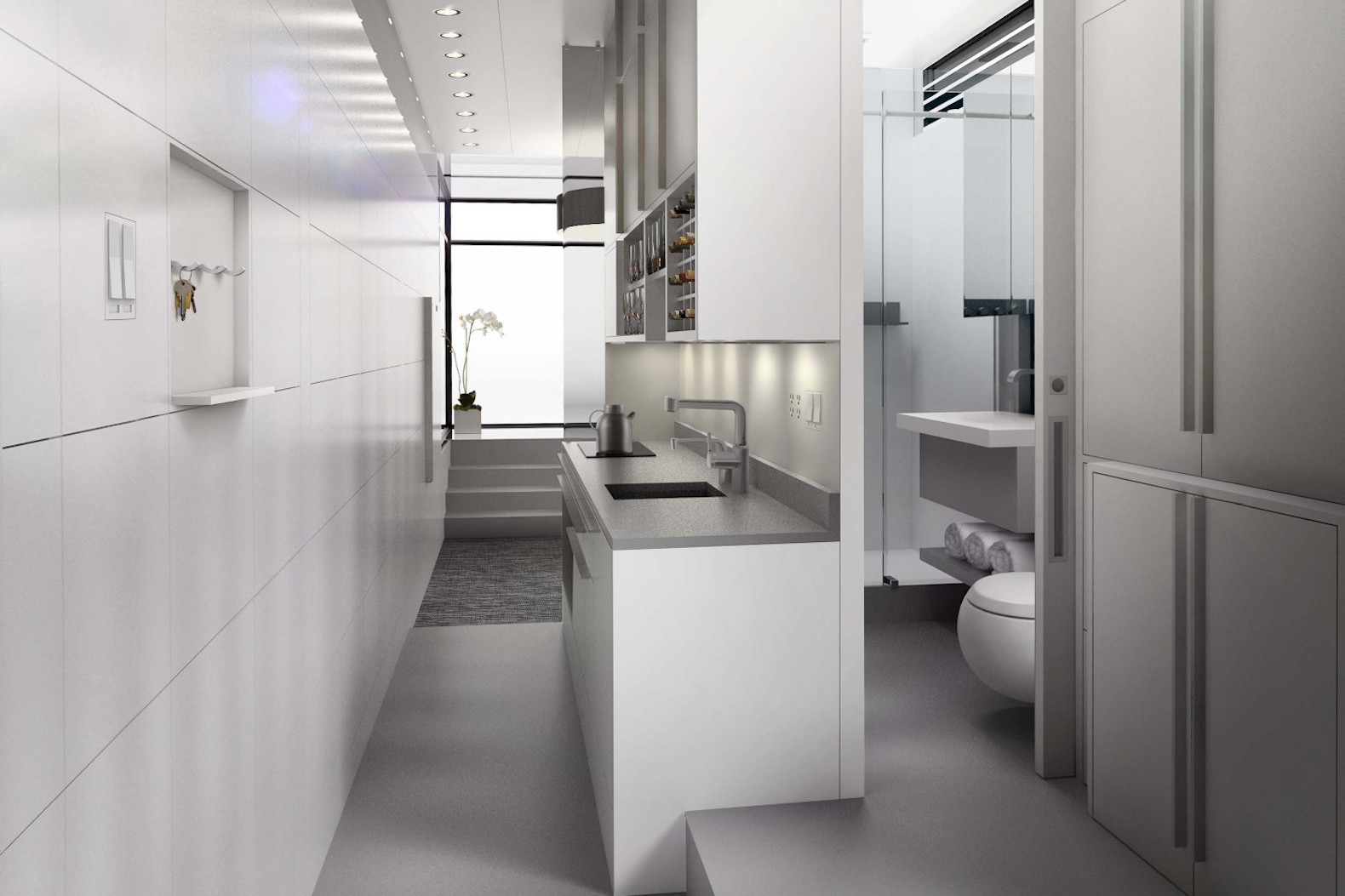 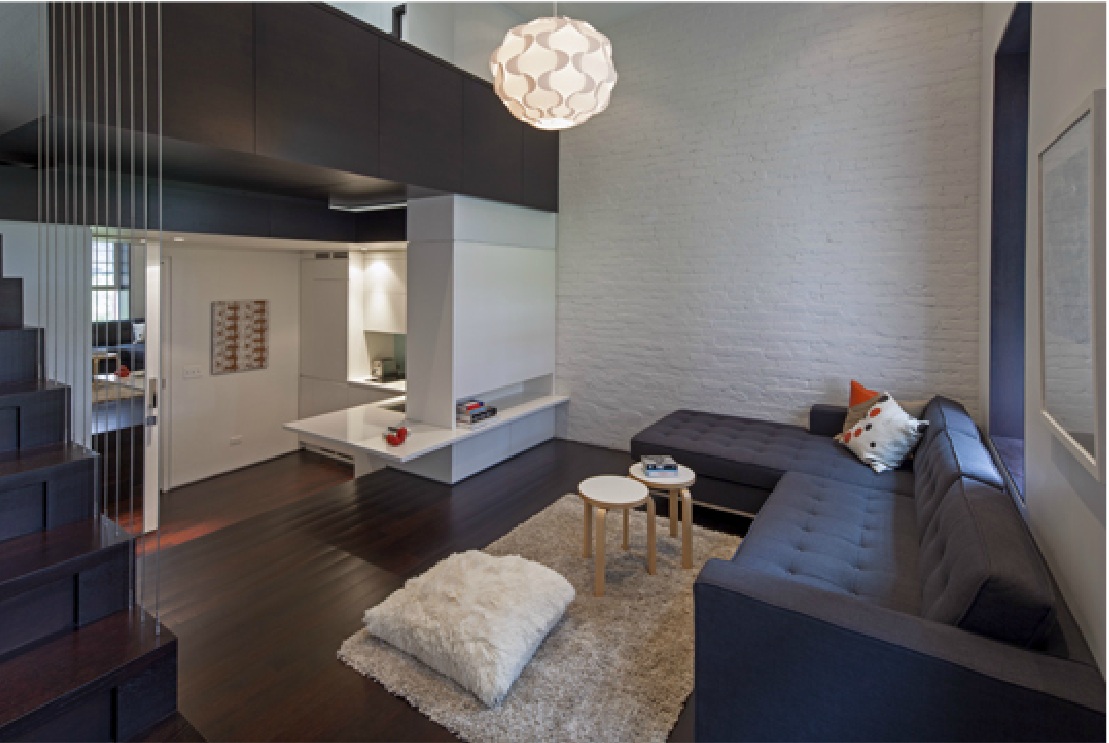 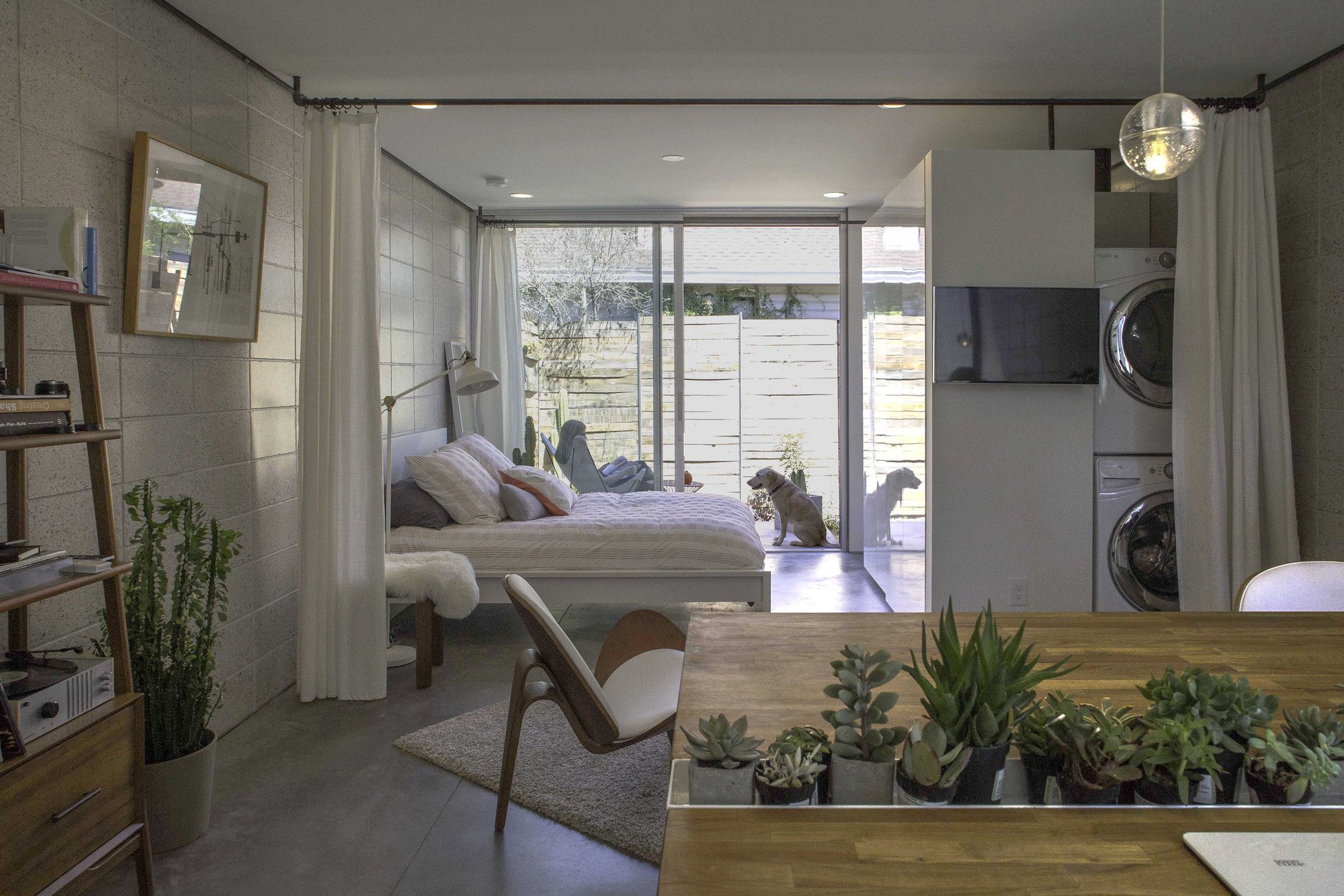 Living large used to be the American dream. Big house, big yard, big juicy steaks, and a big 12 cylinder chrome street rocket sitting in the driveway. Then, the recession of 2008 and the rise of sustainable living came along and people got smart; realizing that for saving cash and keeping life simple, smaller and sustainable was the way to go.

It wasn’t long before the real estate market adjusted to meet the needs of people who were making barely livable wages, if they made any at all. Designers and developers came out of the woodwork and began making micro apartments and affordable housing that was greener and smarter than the days of the Tudor (or four door) McMansions.

We enjoy anything novel that helps people live better and waste less to keep the air clean, the seas blue, and life a little less complicated. That’s why we salute these 15 minimalist apartments.

Modular accessories, small partitions, and sliding doors help break up the 269 square feet worth of space. A small sofa set at a round dining table complete with folding chairs allows entertainment seating for four, without anyone needing to sit on the bed.

Crafted by Italian prisoners, who know a thing or two about living small spaces, these rooms are 96 square feet, but provide sleeping and working space for a pair of people. Meant to be added to an existing house, or used in a larger living domicile, there’s no kitchen or bathroom, so you’ll want to put these freestanding “cells” where those amenities are included.

Designed by Polish master  Szymon Hanczar, this bears a strong resemblance to a Captain’s cabin aboard smaller seafaring vessels from the 18th century. A bike rack mounted high on the wall, a kitchenette, bathroom, and a hammock for napping, as well as a loft with a bed give a lone individual everything they could want in just 139 square feet.

Carmel Place was the first building in New York City to offer nothing but micro apartments for those looking to live in the Big Apple on the cheap. Fold-out couches, or Murphy beds are available with all the other comforts of home for cooking, working, entertaining, and stashing your unmentionables out of sight.

The second ingenious iteration of smart living from Patrick Kennedy of Panoramic Interests, Smart Spact 2.0 apartments are built with multi-function in mind. Beds turn into dining room tables, kitchens become work spaces, and couches thankfully do not become toilets. Usually coming in at under 300 square feet, the surprise isn’t the size, it’s the level of utility and ingenuity.

Believe it or not, in 340 square feet worth of space it is possible to have five rooms separated and segregated thanks to savvy wooden dividers and a build that is reminiscent of an extremely high-end recreational vehicle. The kitchen is also a breakfast bar, and a flat screen TV descends from above as an impressive piece of high-tech pomp.

Walls that stay in place are so passé. Instead of using only the space available to maximum effect, this apartment includes a moving center wall mounted on rails that can alter the layout of the home and block off certain areas, while expanding others. With just a push, it reorganizes from work to lounging to divided sleeping quarters, showing hidden cubbies and closets along the way.

The fish-eye photography by engineer and designer of the Pico, Steve Sauer, is the only way to capture the glory he has made in just 182 square feet. Note the relaxation area that climbs into an office chair and desk, above which is a bed, lurking over the entryway. It’s work, play, eat, and sleep, all at arm’s length.

The wood on wood on wood look serves dual functions. First, it provides a rustic look to the interior that can easily be stained and painted a variety of colors. Second, it blends together to not only give a sense of deceptive space, but also a way to hide cabinets and storage in plain sight. For instance: Notice how each ascending step is a drawer.

A home for one, or two very dear friends, this crisp and clean space is the ultimate in streamlined modernism. In addition to the work space/dining table, a glorious glass desk overlooking the living space sits above, with a narrow bathroom hidden behind the bed in an elegant style that doesn’t waste a centimeter.

The Arcade Providence was the first shopping mall in America. Though it has fallen into disuse and disrepair, Northeast Collaborative Architects have given it a second life, as a set of minimalist apartments. Weighing in at about 225 to 275 square feet, each living space has all the comforts of home in a classy dollhouse size located inside a stunning building complete with Greek architecture on the outside, right down the ionic columns.

Minimalist living doesn’t need to always have an ultra-modern aesthetic. Like a shrunken slice of Downton Abbey, this New York living space is about the size of a decent garage, yet manages to offer up hints of classic turn-of-the-century looks that are traditional rather than hip along with floor-to-ceiling mirrors that give the illusion of endless space.

Jeff Wilson once lived in a 33 square foot dumpster to learn about how to live minimal. The Kasita apartments are much larger than that at 208 SF, but they have something in common with the dumpster he used to call home: portability. Capable of being loaded onto a large truck and stashed wherever you decide to live, the Kasita moves when you do.

More than double the size of most offerings on this list, this is a 425 square foot New York residence done up by Specht Architects that is made to ooze chic from every fixture. Molded in a loft style with plenty of freestanding space, there’s storage in the least likely places for those who like to keep secrets in small spaces.

Topping the charts at a whopping 450 feet, the apartments at White Stone have a lot in common with the average studio for those just starting out; except they employ loads of space-saving features that make them more than meets the eye. Downright cunning in their use of space, these Phoenix units can often stash more than you could cram into a decent two-bedroom, including energy-smart washer/dryer combos.