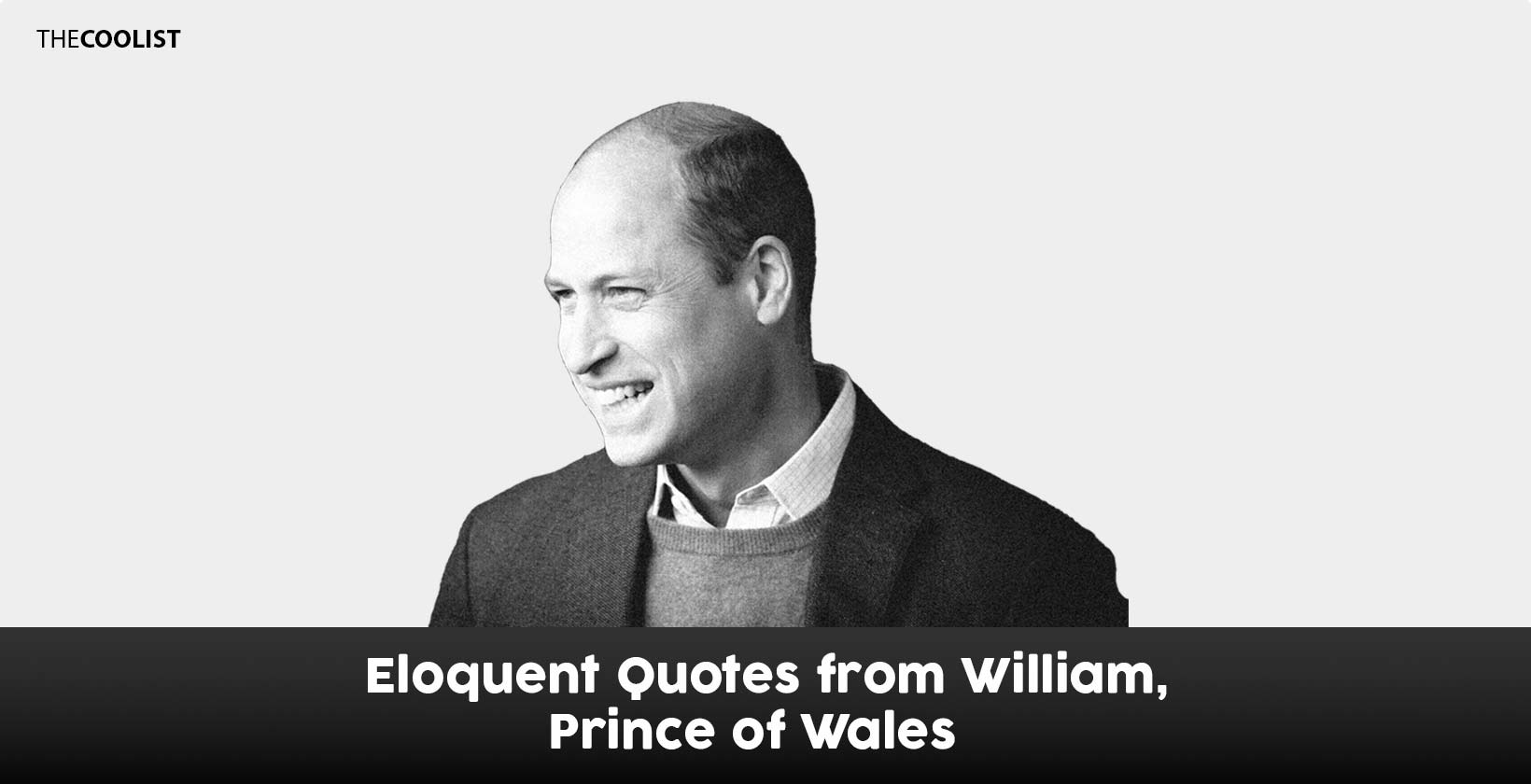 Prince William quotes are rife online, as the new Prince of Wales (and former Duke of Cambridge) finds himself under the scrutiny of the public eye in the wake of his father’s, King Charles III’s, ascension to the throne. In the article below, you’ll find some of the most iconic quotes that demonstrate Prince William’s humility, humour, and love for his family.

My guiding principles in life are, to be honest, genuine, thoughtful, and caring.

William’s destiny is written — it began the moment he was born. However, the following collection of Prince William quotes shows that the county will be in good hands when he takes the throne.

Below are 14 of the best quotes from William, Prince of Wales. As you’ll see below, Prince William understands the importance of choosing the right words — something he’s learned from spending his entire life in the public eye.

1. As I learned from growing up, you don’t mess with your grandmother.

2. I’m reasonably headstrong about what I believe in and what I go for, and I’ve got fantastic people around me who give me great support and advice.

3. People say it’s not ambitious, but it is actually quite ambitious, wanting to help people.

4. I am and always will be an HRH. But out of personal choice, I like to be called William because that is my name, and I want people to call me William – for now.

5. I think it’s very important that you make your own decision about what you are. Therefore you’re responsible for your actions, so you don’t blame other people.

6. I am as independent as I want to be, the same as Catherine and Harry. We’ve all grown up differently to other generations, and I very much feel if that I can do it myself, I want to do it myself.

7. As any new parent knows, you’re only too happy to show off your new child and, you know, proclaim that he is the best looking or the best everything.

8. The thing is, with me, I look on the brighter side of everything. There’s no point being pessimistic or being worried about too many things because, frankly, life’s too short.

9. The fish only knows that it lives in the water after it is already on the river bank. Without our awareness of another world out there, it would never occur to us to change.

10. No one should be bullied for their sexuality or any other reason, and no one should have to put up with the kind of hate that these young people have endured in their lives.

11. I know that I am very fortunate. I have the support of my family and friends, I do a job I enjoy, and I have Catherine.

12. All these questions about do you want to be king? It’s not a question of wanting to be, it’s something I was born into and it’s my duty… Wanting is not the right word. But those stories about me not wanting to be king are all wrong.

13. I don’t deliberately select my friends because of their background. If I enjoy someone’s company, then that’s all that counts. I have many different friends who aren’t from the same background as me, and we get on really well it’s brilliant.

14. When I first met Kate, I knew there was something very special about her. I knew there was possibly something that I wanted to explore there. We ended up being friends for a while and that just sort of was a good foundation. Because I do generally believe now that being friends with one another is a massive advantage. And it just went from there.

The following nine funny Prince William quotes show the future king has inherited his sense of humor from his grandmother.

15. It’s like a rugby team. If you’re picking for the World Cup final, you’re picking experience with youth. Everything is better off having that balance and that mix. I think that especially goes for the monarchy as well.

16. I’ve had lots of kids come up and ask for my autograph, and I’ve had a grandmother stop me and ask me if I know a good place to buy underwear.

17. I hope I’m not a tourist attraction – I’m sure that they come here really because St. Andrews is just amazing, a beautiful place.

18. I have to say that I thought search-and-rescue duties over Snowdonia were physically and mentally demanding, but looking after a 3-week-old baby is up there!

19. I just want to go to university and have fun – I want to be an ordinary student. I’m only going to university. It’s not like I’m getting married – though that’s what it feels like sometimes.

20. I’m always open for people saying I’m wrong because, most of the time I am.

21. Everybody thinks I drink beer, but I actually like cider!

23. As you might have gathered, Catherine and I have recently become proud parents — of a baby who has a voice to match any lion’s roar! He’s pretty loud but of course, very good-looking!

Below are five Prince William quotes about Diana that show the lasting impact his mother had on his life.

24. There’s no pressure; like Kate said, it is about carving your own future. No one is going to try to fill my mother’s shoes; what she did was fantastic. It’s about making your own future and your own destiny, and Kate will do a very good job of that.

25. What my mother recognized back then – and what I understand now – is that grief is the most painful experience that any child or parent can endure. But my mother was determined to help those in need, and she would have been immensely proud, as I am, of all that Child Bereavement UK has achieved these last 21 years.

26. I would love her to have met Catherine and to have seen the children grow up. It makes me sad that she won’t, that they will never know her.

27. In the years ahead, I hope to bring George, Charlotte, and Louis to see the fantastic organizations doing inspiring work to support those most in need — just as my mother did for me.

28. As she instinctively knew, and as I continue to try and highlight, the first step to fixing a problem is for everyone to see it for what it truly is.

The following seven Prince William quotes on Queen Elizabeth show the love the prince has for this grandmother. Their relationship highlights that no matter the position, family always comes first.

29. My relationship with my grandmother has gone from strength to strength. As a shy, younger man, it could be harder to talk about weighty matters. It was: ‘This is my grandmother who is the Queen, and these are serious historical subjects.’

30. Being a small boy, it’s very daunting seeing the Queen around and not really quite knowing what to talk about.

32. My grandmother certainly does not care for celebrity.

33. I, however, have lost a grandmother. And while I will grieve her loss, I also feel incredibly grateful. I have had the benefit of The Queen’s wisdom and reassurance into my fifth decade. My wife has had twenty years of her guidance and support. My three children have got to spend holidays with her and create memories that will last their whole lives.

34. My grandmother famously said that grief was the price we pay for love. All of the sadness we will feel in the coming weeks will be a testament to the love we felt for our extraordinary Queen.

35. You know when you’re in her bad books. I’ve seen the way the corgis get told off when they’re in trouble.

The following three quotes about Prince William have come from those who know him best.

36. You know, over the years, William has looked after me, he’s treated me very well – as the loving boyfriend he is, he is very supportive of me through the good times and also through the bad times. – Kate Middleton

37. My father and my brother, they are trapped. They don’t get to leave [their roles]. And I have huge compassion for that. – Prince Harry, Duke of Sussex

38. Prince William in private is more like Prince Harry, fun, cheeky, warm. That was good to know. I feel like in public, you increasingly see the weight of the role on his shoulders. – Keir Simmons

What did Prince William say about Harry?

Prince William said that Harry had made things very uncomfortable for the Royals. Prince William was referencing the interview Harry and Meghan gave to Oprah wherein they ‘dished the dirt’ on what life with the royals is like. Even now, the brothers are still at odds with one another. Recently, King Charles III urged his sons to settle their differences.

What did Prince William say to Kate at the altar?

At the altar, Prince William said to Kate: “You look lovely. You look beautiful.” The royal wedding was a day of great celebration across the UK; however, the now famous words whispered by Prince William to his bride were long the subject of some great debate.