Drones are our personal eye-in-the-sky spy planes. Their ever-increasing ability to snap remarkable pictures and record stunning videos from angles heretofore unavailable to anyone but rescue chopper pilots and UAV commandos has made the sky dark with these wonderful machines. Those who haven’t joined the drone revolution yet are missing artistic opportunities to dazzle the world with just the click of a button. It’s so simple that even a child can do it.

Don’t fall behind the curve. Just look below at these 17 wonderful drone images to see how multi-functional, unique, and artistic a simple hex or quadcopter can be. They’ll take your photography game to the next level, literally.

One doesn’t need to go soaring into the clouds to get an impressive picture. On the sands of the desert, where buildings are scarce and mountains are even moreso, a simple drone allows for a higher look at the desolate expanse. Beauty, a sense of loneliness, and a treatise on the indomitable female spirit in the modern wasteland is the result.

Ricardo Matiello lives in the impoverished nation of Brazil, where he has found an escape from the jungles and tribulations far below. Here he captures the top of a chapel lurking over the low-lying clouds in the city of Maringá. Whatever your beliefs in a holy overseer, there’s no denying that this photo seems divinely inspired.

Potentially one of the most famous drone pictures ever taken, this still shot of a tiny piece of human equipment soaring with an eagle is proof positive of why life in the skies is better. Best of all is the inscrutable look on the bird’s face. Likely, it is trying to decide if the drone would make a suitable meal.

The Redeemer statue in Rio de Janeiro, home of the 2016 Olympics, is perhaps the second most famous anthropomorphic work in the world, behind the Statue of Liberty. Though it has been photographed from nearly every angle in a thousand conditions, never before has a picture thought to offer up what the statue itself might see as it looks down on the teeming throngs of humankind.

Jakarta is a wild city unto itself. It’s also a place of innovation, where those whose ideas are too unusual, too savage, or too amazing can find fertile soil in which to grow. A happy accident of a drone pilot taking his flying friend out for a stroll one night, he spotted this spider-webbed structure of broken light sitting among a slummy neighborhood and knew he must capture it.

Humanity likes to think it rules the planet, but this photo shows how even small lakes tucked away in forested regions dwarf our many accomplishments. A laughable ribbon of highway runs between these bodies of water which witnessed our evolution from animals, and will await our downfall.

A derelict nuclear power plant that sits in California, this drone’s picture is a daunting example of how close the utilities of man can come to destroying us. Shut down to avoid a catastrophic meltdown, this eyesore of a behemoth stands as a grim reminder to limit our reach and play not with forces beyond our ken.

As we cruise around on the byways that crisscross the landscape, we often forget about the big picture, focusing instead on the idiot that just cut us off. City architects and planners must think larger than the average motorist, as evidenced by this shot that captures the artful swoops and mechanical precision of something as simple as a highway.

A look at how easily the high angle of a drone can turn an ordinary bridge into a work of art, this is a forgettable stretch of road over an unremarkable lake. That is, until a master photographer and his beloved copter make it so much more.

Proof positive that the hill are truly alive, these veiny falls confuse the eye at first, creating a dissociative sense and challenging the viewer to understand precisely what they are looking it.

A harvester hacking through a crop of French lavender conceives a remarkable tableau. Though the flowers are lovely, we can clearly see the ugly side of culling nature’s beauty for profit. An ugly, industrial slasher leaving only destruction in its wake so that blooms can be shipped off and bought is a heartbreaking vision that only a drone could capture.

Though slightly easier to shoot than soaring along as an eagle’s wingman, following the terrifying jump of a person in a wingsuit is enough to turn the stomach. Magnificent in a twisted way, the photo can easily induce vertigo. A visceral response to such a skillful photograph.

The bright orange bridge that spans the waters of the City by The Bay is often shot from a distance to capture its architectural awe. This drone photo goes a bit deeper than your average postcard by creating insight into the cables and walkways where those who toil on the bridge must do their hazardous work.

Arguably the best reason for drone photography, being able to see fireworks from any angle and feel as if you’re part of the explosive action is a vicarious delight.

You won’t ever be invited into the private sanctuary on the Katskhi Pillar where a lone monk lives, but seeing the painstaking construction offers its own measure of peace and solitude. An escape worthy of the name.

A star-shaped military installation in The Netherlands, Fort Bourtange has one of the few remaining moats in the world. The flat pastoral landscape makes it tough to get a good aerial shot, but the view is well worth it.

Black and white photography is often the hallmark of an amateur, since anything looks more dramatic in grayscale. Here it’s used to shocking effect, showing people as immaterial pawns that do nothing but block the light. A stark realization of a profound idea.

Photography
Photographing Summer: How to Nail Five Summer Moments with the Perfect Photo

Photography
Shutterbugs Exposed: Photography Jobs From Around The World

Gadgets
No Pilot Necessary: The Lily Camera Drone is the First Fully-Automated Quadcopter 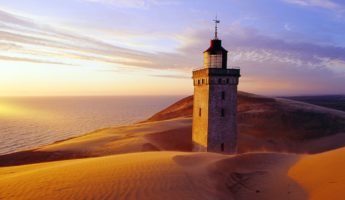 Photography
Lighthouse Pictures: 22 Stunning Spots Where the Sea Meets the Shore
TheCoolist is supported by our readers. When you buy through links on our site, we may earn a commission. Learn more.
Let's connect
What’s Hot
Join TheCoolist
100% free, unsubscribe anytime.