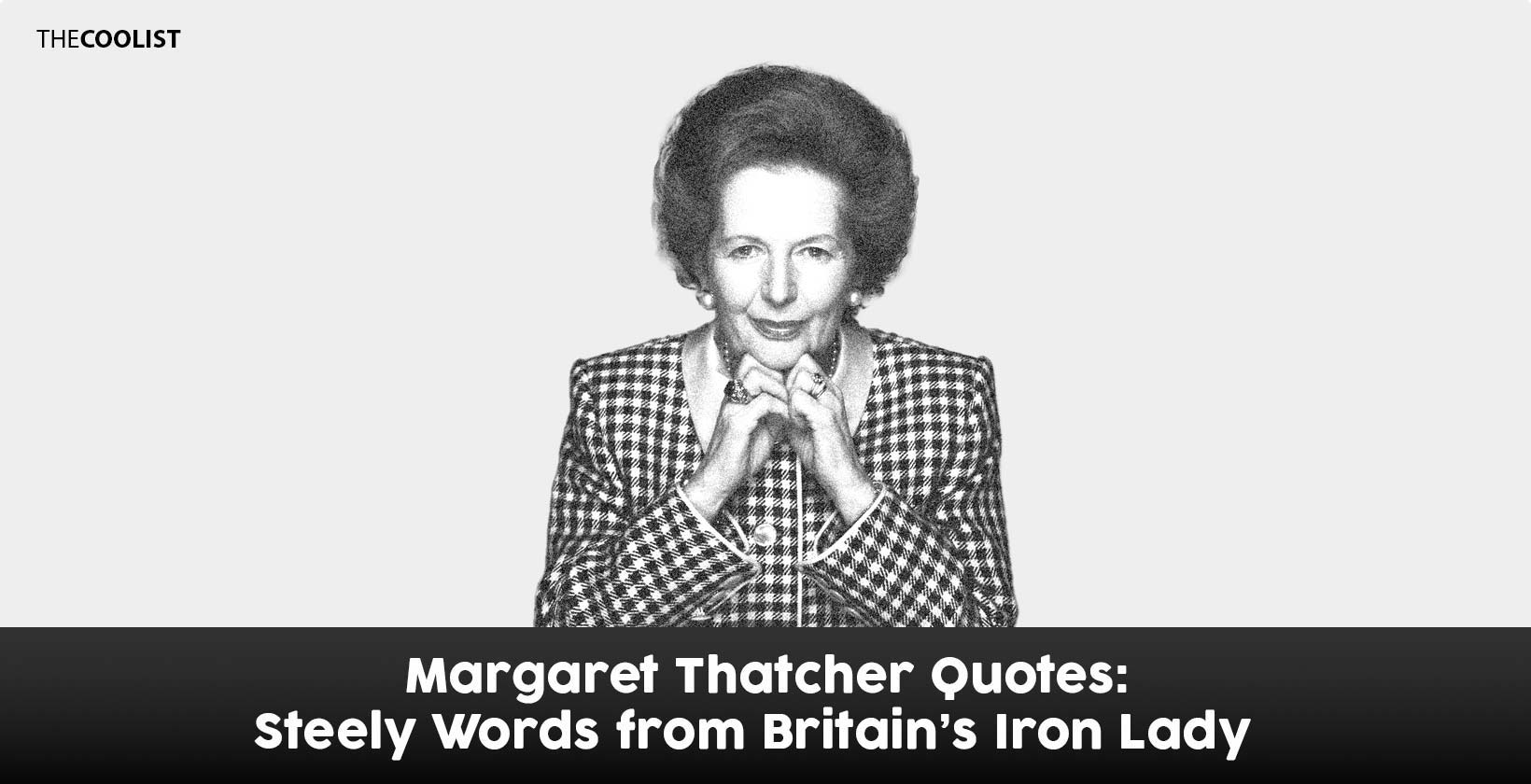 Baroness Margaret Thatcher, born Margaret Hilda Thatcher in 1925, was an English politician, leader of the Conservative party, and the first female Prime Minister in British history.

Margaret Thatcher is known as the Iron Lady; for her strong will and unflappable character. However, Thatcher remains a highly polarizing figure in British history. To some, she rescued the country and returned it to the position of global power. To others, she targeted the working class through the privatization of major state-owned institutions and her deliberate destabilization of the trade unions.

Most famous quotes by Margaret Thatcher

Below are six of the most famous quotes by Margaret Thatcher. As the first female prime minister of Great Britain, Margaret Thatcher needed to be dedicated and posses the courage to match her convictions.

1. Look at a day when you are supremely satisfied at the end. It’s not a day when you lounge around doing nothing; it’s a day you’ve had everything to do and you’ve done it.

2. You may have to fight a battle more than once to win it.

3. I do not know anyone who has gotten to the top without hard work. That is the recipe. It will not always get you to the top, but it will get you pretty near.

4. Being democratic is not enough, a majority cannot turn what is wrong into right. In order to be considered truly free, countries must also have a deep love of liberty and an abiding respect for the rule of law.

5. No-one would remember the Good Samaritan if he’d only had good intentions; he had money as well.

The following twelve Margaret Thatcher quotes on leadership show that she lived her life in a very goal-oriented way. Nicknamed the Iron Lady, she did not suffer fools and enjoyed a good debate.

7. If you lead a country like Britain, a strong country, a country which has taken a lead in world affairs in good times and in bad, a country that is always reliable, then you have to have a touch of iron about you.

8. If you set out to be liked, you would be prepared to compromise on anything at any time, and you would achieve nothing.

9. I always cheer up immensely if an attack is particularly wounding because I think, well, if they attack one personally, it means they have not a single political argument left.

10. The facts of life are conservative.

11. You don’t tell deliberate lies, but sometimes you have to be evasive.

12. It pays to know the enemy – not least because at some time, you may have the opportunity to turn him into a friend.

13. Do you know that one of the great problems of our age is that we are governed by people who care more about feelings than they do about thoughts and ideas?

14. To those waiting with bated breath for that favorite media catchphrase, the U-turn, I have only this to say, ‘You turn if you want; the lady’s not for turning.

16. They’ve got the usual Socialist disease — they’ve run out of other people’s money.

17. I think we have gone through a period when too many children and people have been given to understand ‘I have a problem, it is the Government’s job to cope with it!’ or ‘I have a problem, I will go and get a grant to cope with it!’ ‘I am homeless, the Government must house me!’ and so they are casting their problems on society, and who is society? You have individual men and women, and there are families, and no government can do anything except through people, and people look to themselves first.
There is no such thing as society. There is a living tapestry of men and women and people, and the beauty of that tapestry and the quality of our lives will depend upon how much each of us is prepared to take responsibility for ourselves and each of us prepared to turn round and help by our own efforts those who are unfortunate.

18. Plan your work for today and every day, then work your plan

Below are eight Margaret Thatcher feminism quotes that capture the dogged determination that saw her achieve everything she did. A powerful woman, Thatcher never hid her gender or allowed herself to feel inferior because of it.

19. I’ve got a woman’s ability to stick to a job and get on with it when everyone else walks off and leaves it.

21. Being powerful is like being a lady. If you have to tell people you are, you aren’t.

23. Of course, to be a mother and a housewife is a vocation of a very high kind. But I simply felt that it was not the whole of my vocation. I knew that I also wanted a career. A phrase that Irene Ward, MP for Tynemouth, and I often used was that ‘while the home must always be the centre of one’s life, it should not be the boundary of one’s ambitions.

24. My policies are based not on some economics theory but on things I and millions like me were brought up with: an honest day’s work for an honest day’s pay; live within your means; put by a nest egg for a rainy day; pay your bills on time; support the police.

25. The battle for women’s rights has been largely won.

26. The woman’s mission is not to enhance the masculine spirit but to express the feminine; hers is not to preserve a man-made world but to create a human world by the infusion of the feminine element into all of its activities.

Below are nine funny Margaret Thatcher quotes that confirm while she was a stern woman, she had a good sense of humor. It takes nerves of steel to run a country, but you can’t accomplish anything without good humor.

27. I love arguments, and I love debate. I don’t expect anyone just to sit there and agree with me – that’s not their job.

28. To cure the British disease with socialism was like trying to cure leukemia with leeches.

29. To wear your heart on your sleeve isn’t a very good plan; you should wear it inside, where it functions best.

30. I am extraordinarily patient, provided I get my own way in the end.

32. If my critics saw me walking over the Thames, they would say it was because I couldn’t swim.

33. One of the things being in politics has taught me is that men are not a reasoned or reasonable sex.

34. When I’m out of politics, I’m going to run a business; it’ll be called rent-a-spine.

35. I’m back… and you knew I was coming. On my way here, I passed a cinema with the sign ‘The Mummy Returns.

Recommended reading: The iconic words and pearls of wisdom of Prince Philip

Below is a telling quote from Margaret Thatcher on Royalty. Thatcher regularly met Queen Elizabeth to discuss matters. While she detested the meetings and was too serious for the queen, they shared healthy respect for each other.

36. I believe that the royal family are a focus of patriotism, of loyalty, of affection, and of esteem. That is a rare combination, and we should value it highly.

Quotes from when Margaret Thatcher was young

The following four quotes from when Margaret Thatcher was young. Each quote stems from the time before her reign as prime minister.

38. People from my sort of background needed grammar schools to compete with children from privileged homes like Shirley Williams and Anthony Wedgwood Benn.

39. I started life with two great advantages: no money and good parents.

Below are three quotes by Margaret Thatcher impersonators. These quotes capture these celebrity’s experiences of meeting the Iron Lady herself.

41. I was at Wembley in 1986 for a Conservative party conference. Afterward, she came up to me and said, ‘I know you could have delivered my speech better than I did, but was it all right? – Janet Brown – Margaret Thatcher Impersonator

43. I don’t think she ever relaxed in a chair. I once went to a dinner where there was red wine spilled, and I remember catching her eye and giving her a grin. It was like watching through glass. You got nothing at all. – Sylvia Syms – Actress and frequent Margaret Thatcher impersonator

Below are six quotes about Maggie Thatcher from those that knew her. She remains a largely polarizing figure in British political history.

44. The world has lost one of the great champions of freedom and liberty, and America has lost a true friend. As a grocer’s daughter who rose to become Britain’s first female prime minister, she stands as an example to our daughters that there is no glass ceiling that can’t be shattered. As prime minister, she helped restore the confidence and pride that has always been the hallmark of Britain at its best. And as an unapologetic supporter of our transatlantic alliance, she knew that with strength and resolve we could win the Cold War and extend freedom’s promise. – Barrack Obama

45. She will be remembered not only for being Britain’s first female prime minister and holding the office for eleven years, but also for the determination and resilience with which she carried out all her duties throughout her public life. Even those who disagreed with her never doubted the strength of her convictions and her unwavering belief in Britain’s destiny in the world. – Gordon Brown

46. Margaret Thatcher’s belief in freedom and optimism about the future overcame all. Her determination is our generation’s inspiration. – George Osborne, Chancellor of the Exchequer

48. Thatcher’s memoirs are essential for an understanding of her time because they capture all the qualities of her character and, inevitably, some of her defects as well. They are lucid, opinionated, self-assured, wide-ranging, and indispensable. – Henry Kissinger

49. She approaches the problems of our country with all the one-dimensional subtlety of a comic strip. – Denis Healey

Why is Margaret Thatcher famous?

Why is Margaret Thatcher controversial?

Margaret Thatcher is a controversial figure because of her staunch conservative beliefs and her policies’ impact on the British working class. Margaret Thatcher remains a polarizing figure, with her supporters praising her for bringing Britain back to the forefront of global economies. While her detractors blame her for sky-rocketed interest rates, mass unemployment, and targeted attacks on aid given to the working class.

What did Margaret Thatcher accomplish?

Margaret Thatcher accomplished a lot for businesses during her time as prime minister. One of the driving points of her British reform was the privatization of many companies. This worked to the benefit of her government but was detrimental to the working classes. In addition, Margaret Thatcher actively worked to weaken the power and effectiveness of trade unions. Another accomplishment of the Thatcher government was establishing the Right to Buy scheme, which gave families with a low income the ability to buy their own properties.