150 Best Dad Jokes: The Only Joke List You’ll Ever Need to Embarrass Your Family 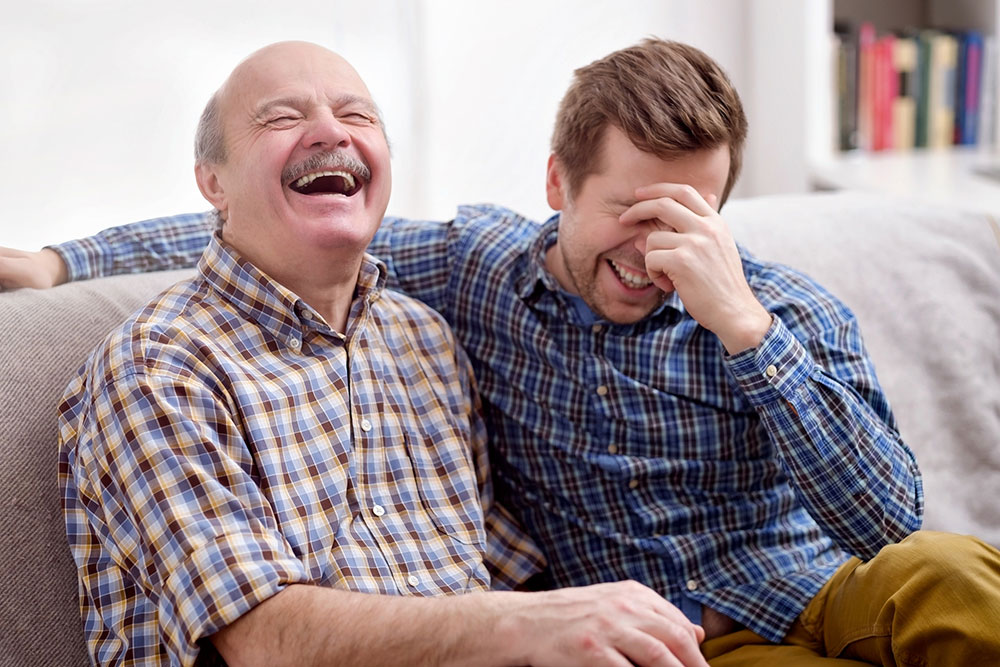 They say laughter is medicine for the soul. If that’s the case, you will all be fit and well through this life and the next by the time you finish reading our compendium of the 150 best dad jokes.

Everybody loves a good joke, especially dads, for we are a special breed of joke-teller. Master of the pun and the corny one-liner. Fully trained in the art of delivery, hitting you with humor from all angles, both when you expect it, and more importantly, when you don’t.

To make it an even easier read for you, we’ve separated all our dad jokes into categories to help you prepare your repertoire for any occasion. So go on and add us to your bookmark feed because we’ve got material to keep you telling jokes the whole year through.

Here’s your shortlist of the 150 best dad jokes:

However, before we take a look at our corny dad jokes, we should first spend a second pondering the greatest question of them all: When does a joke become a dad joke?

What Is a Dad Joke, and How Can You Make One Land?

I would love to be able to tell you that there is a simple formula for creating funny dad jokes. Something like:

Sadly, however, it is far more complicated than that. An absolute cracker of a dad joke needs to be almost as un-funny as it is funny. It needs to take an understanding from the occasion and tailor the delivery to suit. Maybe a little tongue in cheeky, perhaps a single toe from being considered a foot-in-the-mouth situation.

As the teller of the joke, only you can judge, and that is where the art of dad jokes already starts to come into play. Once you understand the basics of dad humor, you can begin to get a little more creative, playing with ingredients such as embarrassment and self-deprecation. If you are feeling fearless, you can even play around with anger. However, that is a joke-telling ingredient best left to true dad jokes experts.

We cover them all in the following lists of the best dad jokes, but user discretion is advised, and we cannot accept any liability for the adverse reactions that may be encountered.

15 Funny Dad Jokes | A Cringe for Any Occasion

When thinking about the best dad jokes, it’s good to start with some basic, all-around funny jokes. These are the sort of jokes you could drop without warning in any situation without worry.

They also make great jokes for those making their first venture into the world of corny dad humor. They require minimal skill but deliver deep-belly laughs every single time. Whether you are looking for an ice-breaker, or just want to embarrass the kids when they are with their friends – yes, you know, being THAT dad – these jokes are perfect.

15 Bad Dad Jokes | So Terrible, You Can’t Help but Laugh

The best dad jokes are not necessarily funny. In fact, they are anti-humor most of the time. If anything, it is their distinct unfunny edge that makes them so hilarious.

To become a skilled teller of bad dad jokes, you need to accept the risk of failure. That doesn’t necessarily mean your joke is genuinely bad, but rather, your execution and delivery might need to be tweaked. Luckily, the best way to get better at something is to practice, so keep throwing these corny jokes out there every chance you get.

15 Dumb Dad Jokes for Kids | How to Troll Your Children

Of course, dad jokes are for everybody, but at their core–and if we are honest, at their heart–they are all about the kids. A proper dad joke for kids is not greeted with laughter but with a groan, eye roll, or possibly even an accusation of lameness. If you play it right, any of these following jokes for kids could earn you the trifecta of kid reactions.

Just remember, laughter is good for the ears, but groans and disownment are comic nourishment for a father’s soul.

We will get to the blue dad jokes in a second, but for now, we are going to keep things family-friendly. After all, the majority of occasions where your dad joke skills are going to be called for will be in family settings.

These clean dad jokes will always go down a treat from waiting at the school gates to quips for around the dinner table. Just remember to space out your delivery. You don’t want anybody pulling a muscle … the way the clam did at the underwater disco.

Yes, there are plenty of clean jokes for adults, but, well, sometimes you just want to get a little dirty. Besides, dirty dad jokes make us laugh that little bit harder than the rest. In fact, inappropriate, innuendo-laden jokes can be a double whammy of success because they can make most people laugh and put those prudish guests on edge just enough to make the rest of the evening hilariously uncomfortable for everybody.

As the keeper of the dad jokes, it is your duty to ensure moderate offense is given and taken from time to time. All the while accepting that there could be occasions when things may backfire., It’s a risk versus reward world, and only the truly brave will ever succeed.

Are you a single dad looking to get your toes wet in the dating pool again? Well, this is the section for you. For the next few jokes, we are going to look beyond dumb dad jokes and look at the smoothest pick-up lines to get the ladies smiling.

Imagine it, you’re in a crowded bar, you see a lovely lady sitting there, but you freeze. It’s been years since you dated anybody, you’ve not slept through the night in years, and you’re not sure if you took the nail polish off your toes from where your kid was playing salon. So you need something special if you want to stand a chance.

Related Reading: 150 Never Have I Ever Questions

These lines, well, why they might not work, will certainly make your evening memorable.

15 Dark Dad Jokes | Black Humor to Light Up Your Day

We would all love to have two things as a kid: a dad who tells dark jokes and an uncle with Tourettes.

Dark dad jokes are an acquired taste and certainly need to be used sparingly. Come out with one at the wrong time, and the repercussions can be long-lasting. I would recommend introducing the dark jokes if you are an experienced dad joker and know your audience well.

Read on if you dare, but the following 15 dark jokes are named so for a reason. So if you are easily offended or have no interest in the dark side, scroll down just a little. I promise there are plenty of corny dad jokes to come.

Nobody likes growing older, but sadly, it is inevitable. So why not add a few of these hilarious birthday dad jokes to your humorous arsenal. Of course, we can’t guarantee the birthday boy/girl will be happy about them, but the guests will surely be in hysterics.

Much like some of the line-towing jokes on this list, you will need to know your audience before you make birthday jokes. Some people don’t take well to getting a year older. Let’s face it, the last thing you want is to get kicked out of the party after your first joke … or before cake.

Halloween is one of the best holidays. It has everything you could want. You get to dress up, there are parties to go to, more candy than you could ever eat, and yes, some of the very best Halloween jokes are dad jokes.

Don’t believe me? Check out the below examples, which will have you screaming with laughter before the witching hour is upon you. Laughter might not be the scariest thing in the world, but there isn’t a single better pairing than horror and comedy.

15 Great Christmas Dad Jokes | ‘Tis the Season to Be Folly

Ah, Christmas. A time of joy, peace, and goodwill to all men. It also happens to be one of the very best times of year to crack open as many dad jokes as you want. After all, every cracker carries a … cracker of a joke inside them.

There is something special about Christmas that just makes everybody more approachable and friendly. People start loving the corny jokes dads tell around the fire. That is the true magic of Christmas, and is it your duty, as a joke-telling dad, to make the most of it, and fire off one-liners, and make all the festive puns you can think up.

That concludes our list of the best dad jokes of 2021. Some of these are old ones, classics if you will. Others are new. There is no shortage of corny dad jokes out there, so don’t be afraid to change it up a little. Maybe even ad-lib! That’s how some of the best jokes are made.

You can now go away safe in the knowledge that there really are funny dad jokes for every occasion, from school drop-offs to weddings, bar mitzvahs, and even funerals. It’s all just about getting the right timing and understanding the situation. You know, like the saying, knowledge is knowing a tomato is a fruit. Wisdom is not making a sandcastle with grandma at the crematorium.

Start off slow, pick a handful and work on perfecting your delivery. The art of telling dad jokes has been passed down for generations, and now it’s your turn to pick up the mantle and keep the joke world turning.

Let us know your best (or worst) dad jokes and how you landed them in a comment below!